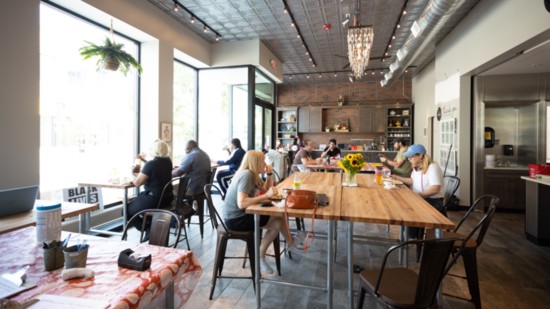 La Soupe founder Suzy DeYoung already understood the impact a skilled chef could have on her community—after all, the 40-year veteran chef was always taking part in events that helped to feed those in need. But, in creating her own nonprofit organization, that desire to make the world a better place went from back burner to main course.

“As chefs, we can pretty much put anything to good use,” Suzy says. She and her dedicated La Soupe staff use that chef know-how to “keep food in the system—not in the landfill.”

Simply put, Cincinnati’s La Soupe bridges the gap between food waste and hunger—rescuing perishable food that would otherwise be discarded by grocers, distributors, restaurants and caterers, then repurposing it as healthy and fresh meals for online retail customers, nonprofits and food-insecure families.

And it’s making quite an impact. Since its founding in 2014, La Soupe has “donated over 997,500 servings to those in need,” Suzy reports from her ongoing role as executive director. More notably, that meal count continues to rise—through June of 2020, La Soupe has rescued 500,000+ pounds of food to provide more than 292,000 meals. An additional 340,000 pounds of perishables were directly donated to those in need.

Partners within our own community allow Suzy to deliver on her mission. Chef Jaime Carmody at Out of Thyme Kitchen Studio, Josh and Nicole House at Pickles & Bones Barbecue, and Loveland’s Mio’s Pizzeria all take part in La Soupe initiatives.

“I heard Suzy on a podcast around 4 or 5 years ago and was immediately inspired by her vision and mission for La Soupe,” says Josh of Pickles & Bones. “Our participation quickly became one of the highlights of our week.”

Elevating kitchens to create the exceptional is in Suzy’s blood. After all, her father brought fine dining and the city’s first Mobil 5-star rating to Cincinnati with the Maisonette. One grandfather was the chef of the Union Club in New York City; the other was chef of the Sherry Netherland, also in New York City.

As a restaurateur and chef herself (notably as an owner of La Petite Pierre), Suzy had the pleasure of preparing meals for President George W. Bush, President Bill and Hillary Clinton, Prince Andrew, Bruce Springsteen and Julia Child. Nowadays, she rubs shoulders with her indispensable chef partners, found throughout Greater Cincinnati.

“We loved being able to include Chef Jaime at Out of Thyme in our last round of the funded Community Kitchen model,” Suzy says. That Community Kitchen concept puts furloughed restaurant workers back to work in preparing the meals it provides, and was created as part of the nonprofit’s pivot in response to COVID-19.

Chef Jaime seconds the notion that her team’s participation is vital, and points out that it “gives us a way to connect with the community, getting meals to those who need them,” she says. “La Soupe is really great about helping us connect with people on a broader scale ... especially in these crazy times.”

According to the La Soupe website, 40% of food in the United States is thrown away, and 2 in 7 Cincinnatians live in poverty. As society grapples with the pandemic at every level, the most vulnerable are even more at risk to not receive the proper nutrition needed for a healthy lifestyle.

Josh at Pickles & Bones is proud of the difference his team is making in coordination with La Soupe. “Food insecurity and childhood hunger,” he says, “are problems that simply should not exist in this world of excess. We’re fortunate that people like Suzy are strong enough to tackle these issues head on.”

That coordination, of course, is key. It can also present its own set of challenges.

“Logistics ... can be daunting,” Suzy admits, especially when compounded by social distancing and other enhanced safety precautions. “Because of COVID-19, we have a strict protocol for volunteers.”

An increased demand for La Soupe’s services, however, means that the nonprofit organization depends, in turn, on the communities they support—now, more than ever. That includes financial assistance. “That is what I hate most in saying,” Suzy says. “But we feel now is the time to ask as we grow Community Kitchens.”

According to its website, La Soupe has raised $4.5 million to date for their 915 Capital Campaign—which allowed them to renovate, purchase equipment and move into a significantly expanded operating space, debt-free.

And that’s a very good thing, as demand for La Soupe’s services continues to grow.

“I’ve always given back to the community,” Suzy says. “(But) reversing my clientele to actually cook for those who simply need and appreciate nourishing home-cooked meals is the most rewarding job ever.”

As a 40-year veteran chef, I have always given back to the community. Reversing my clientele to actually cook for those who simply need and appreciate nourishing home-cooked meals is the most rewarding job ever.

We’ve learned so much the last six years, and have some the most dedicated, smart, problem-solving staff ... keeping the food in the system—not in the landfill.