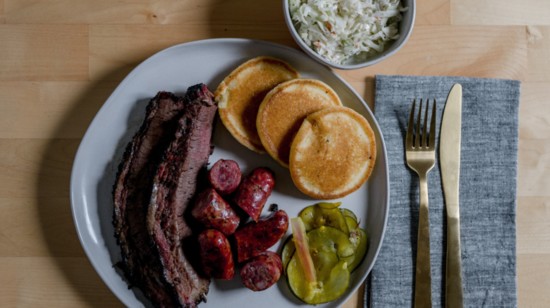 “An old trailer was all we could afford at first. We bought it out by West Virginia, gutted it, and then it took us about a year and a half to scrape together the time and money to actually get started,” says Nicole House, co-owner of Pickles & Bones Barbecue in Milford.

Nicole sits across from me at an outdoor picnic table adjacent to their flourishing carryout barbecue business—a cult favorite among local chefs—that she and her husband, Josh, have built from scratch over the last few years. Josh has generously brought over an enormous tray of textbook-perfect beef brisket with a sizable smoke ring, braised green beans and ham, fork-tender smoked turkey, their signature sausage (linked by Len Bleh of Avril-Bleh & Sons Meat Market in downtown Cincinnati) buttermilk macaroni salad and delicate hoe cakes drizzled with honey. Nicole radiates a bubbly warmth when she talks about their cooking, but it’s also apparent that she retains a no-nonsense approach to the business as well.

“We started part-time in August of 2015. We were doing Sundays in the trailer across the street, mostly just for fun. Josh and I wanted to cook something different than the usual grind, and those Sundays gave us a real taste for the entrepreneurial life. We eventually got enough positive feedback for Josh to quit his full-time job [as the executive chef at the Golden Lamb] the following May.”

With a strong culinary resume of her own—Cincinnati’s Maisonette, as well as Lily’s in Louisville before becoming the chef de cuisine at the Oak Room at the Seelbach Hotel—Nicole keenly understands the financial pitfalls associated with the restaurant business. She and Josh chose to keep overhead costs low by starting with the takeout trailer before progressing to their current carryout model, which opened about a year ago on State Route 131, across the street from the trailer’s original location. The duo favored barbecue for its affordable ingredients but also its communal spirit.

“Barbecue is unique in that it brings everybody together. It’s a cuisine without boundaries. We get customers who roll up in Porsches and people who walk from the neighborhood. Everyone sits together while they wait for their food." –Nicole House

That kind of diverse clientele is also indicative of Milford, to an extent. The Houses are keenly aware of the socio-economic diversity as they live a few miles down the road with their three daughters.

“Along the way, we visited other neighborhoods to look for another location, but we decided that it made the most sense to keep reinvesting in this community, where we live and where our kids go to school. It’s important to do what we can right here.”

Pickles & Bones walks the talk with a community give-back plan that allows them to work with local 501(c)(3) organizations such as their daughters’ elementary school and Newtown-based soup kitchen La Soupe. But the Houses also understand that change starts at home. All three daughters have a hand in helping out at the family business.

“We want to instill a sense of responsibility and work ethic in our girls,” Nicole says. “I’ll bring them over once or twice a week, an hour before we close, and they have work to do. They wipe off the sauce bottles or bring in a few pieces of wood for the smoker.”

When I ask Nicole about plans for the future, she excitedly tells me about a Small Business Administration course she is taking and how she and Josh focus on “purposeful growth” for the tiny business they began with an “old trailer.” But she also remains grounded.

“We want to grow, but we plan to stay casual. And authentic. That’s really important to us.”