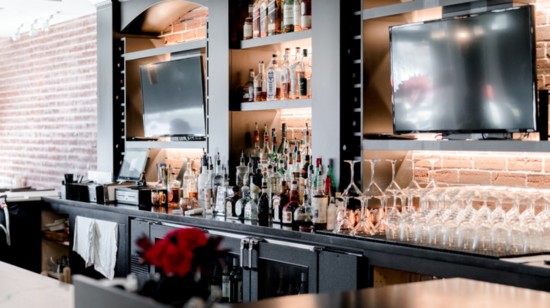 I’m two steps into the front door at Tano Bistro 2.0, and all I can see is the living wall. I’m entranced by the foliage, cascading down in at least two dozen different hues of green. According to Gina Williams, who co-owns the bistro with her husband, Chef Gaetano, that was the plan.

“I really wanted that living wall. We started with that—something organic that would feel fresh and open—then we started adding handmade elements from local craftsmen.”

The vibrant energy conveyed by the ceiling-high wall of plants is indicative of the tenacity with which the Williamses approached rebuilding their business after the May 28, 2017, fire devastated their bistro and several other Loveland Avenue storefronts.

“We spent the first couple of months jumping through a lot of hoops. But we also had plenty of help. The city was extremely supportive, and Chief (Fire Officer) Otto Huber was amazing. It was a coordinated effort, and he did a good job of staying on top of all the moving parts,” Gina recalls.

And while most of the original Tano Bistro staff is back, and the Williamses’ core values of neighborhood hospitality remain the same, they have decidedly upped the ante.

“From a business trajectory, there was a real change, and it was a conscious one,” Gaetano explains. “We had to decide if we really wanted to rebuild or if we just wanted to move on. When you make the decision to not only come back but to purchase the property, that puts you in a different mindset. We put roots in the ground here.”

Both Florida natives, the Williamses had plenty of restaurant experience when they arrived in the area for Gaetano’s job working with the Buca di Beppo Italian Restaurant franchise. He eventually moved on to work for McCormick and Schmick’s Seafood and Steak.

“When the downturn happened, we decided that it made more sense for me to start catering out of the house. We grew the catering really quickly and realized that I needed my own spot. When we found this location, we decided to open a bistro because our catering clients wanted a place where they could sit down and eat,” Gaetano says.

But the space the Williamses found in 2009 wasn’t actually a restaurant. There was no hostess stand and no bar. But there was an adjacent tea room and a defunct clothing store with an apartment upstairs. They put in a commercial kitchen, raised money from investors, and within the first year, expanded into the tea room to create a bar, then expanded into the upstairs apartment the following year for an office and a private dining room. That said, Gina admits that parts of the old building were “quirky.” With a chance to rebuild, the Williamses could design a neighborhood restaurant that was bigger, stronger and potentially even faster.

“We were looking at how we could make it more efficient and maximize the space. We tried really hard to maintain the façade and the architectural feel of the building, and we knew we wanted to do a rooftop bar,” Gina says. “We worked with a Loveland-based designer, Chrissy Staley, and she really drove the look.”

While Gina was handling the business and PR side of things, Gaetano, who she lovingly refers to as the “risk taker” of the duo, was traveling to Kansas to visit stockyards and to a water buffalo farm in northern Ohio in an effort to spend more time with his purveyors before writing his next menu. That water buffalo is now the basis for one heck of a burger.

“We blind tasted it against five other grinds, and it won unanimously. It’s really lean, but it doesn’t have that gamey, heavy iron taste that you might think of with bison. The flavor is very neutral, but it’s also moist in a natural way that isn’t fatty,” he explains.

Gaetano, along with his young kitchen staff, remains inspired by what’s available locally and offers everything from burgers to an octopus mofongo, a Puerto Rican dish made with plantains and a variety of meat and seafood options.

“I think the fact that we are constantly rolling with the seasons makes it hard to pigeonhole our menu. I say bistro because I think it envelops the world. Officially a bistro is a little neighborhood place. Here, it’s going to be fresh and exciting, kinda foodie-ish but also recognizable.”

Whether they are talking about specific dishes on the menu, relationships with purveyors, or their renovation experience with the city of Loveland, the Williamses are a united front when it comes to their particular breed of optimism.

“A lot of our culture here is that we are very family-oriented. Our tagline is ‘simply made to matter.’ Because our staff matters, we matter, the farmers matter, our vendors matter, the guests matter.” –Gina Williams

Leaning back in his chair, arms crossed across his neatly pressed chef coat, Gaetano nods and quietly concurs.