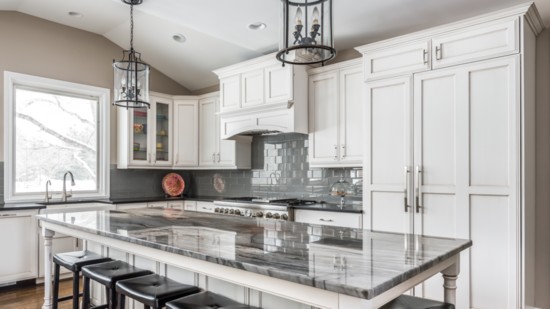 From Gutted to Glorious

Maria Bevington opens her front door with a sunny smile. Immediately, she makes you feel welcome. Comfortable. At home, even though it’s not your own. Her husband, Chad, joins you, adding to the warmth and ease. No surprise that the Bevingtons’ open kitchen—rather, their entire first floor—emits those same feelings of cozy reception. Sit down, the room seems to say. Stay awhile.

What is surprising is that it’s the result of a fairly major remodel. Walking in, you pass the dedicated dining room before the great room and kitchen unfold, an oversized area that’s at once both airy and intimate. There’s a brightly painted homework and craft room just off the kitchen. A mudroom with clever cubbies. Everything flows. It all makes sense. The lines and layout are so natural, it’s hard to believe it was ever anything different.

“We liked what the previous owners had done, but we knew it ultimately wouldn’t work for us,” Chad explains about their decision to remodel. “We wanted an open entertaining area and a really big island … in our family, that’s where everyone gathers.”

Their first call? John Hill Construction. Twenty years ago, the original owners worked with John Hueber Homes to build the house—John Hill had been the supervisor on the project. When John Hill went out on his own, the couple continued to use him for additions, adding both a front porch and sunroom. It was an easy choice for the Bevingtons.

“He already knew the house … this was his work,” Maria says of John Hill. “I don’t think we realized how many changes we would actually make, and John was amazing.”

Purchasing the house in the spring of 2015, the Bevingtons immediately set wheels in motion to complete any renovations before they moved in. At the beginning, the wish list seemed straightforward and simple: open concept, oversized island and dedicated space for their four kids (and dog). John’s architect took one look—and calmly blew up their entire plan.

“We thought we would renovate the existing kitchen, and maybe a little over there,” Chad points to where a separate office space and breakfast nook once resided. “We didn’t realize we would push the whole kitchen over. It was our architect’s idea to turn all three rooms into one.”

Picture this: the former refrigerator and windowed wall are now wide-open space between the Bevingtons’ table and great room. A wall of cabinets housing the sink has been changed into three sliding glass doors. The original island? Gone, replaced by the family table. Mechanicals were relocated. Walls torn down, flooring torn up. One cased opening closed in, the living room replaced entirely. Windows, doors and doorways—moved and repurposed to other areas. With the one-time office and nook now serving as the heart of a breathtaking new kitchen.

“We didn’t change the footprint, but we gutted the whole first floor … everything was done at once,” Chad says. “I was nervous about the timeline … if there was something John needed us to do—make choices, pick out appliances—we did everything we could to stay ahead.”

Put mildly, the timeline John and his team set was ambitious. Start to finish, they had roughly three months to complete the extensive overhaul so the family could move in by Labor Day.

“It was overwhelming,” Maria says. “We were juggling a lot … four kids, a dog, a rental house, plus I was still working part-time and Chad was traveling. I was paying a babysitter just so I could go pick out lighting and paint colors, cabinets and furniture. But we had great people helping us … that was the one thing that kept us on track.”

“We were looking for a single piece,” Maria remembers. “And Chad says, ‘I need you to keep an open mind … come look at this.’ I’m standing in front of this big granite slab and all I can think is, nope, it looks like some weird Japanese painting. It was way out of my comfort zone.”

“I wanted black and white granite for everything, but Chad told me it would look exactly like my mom’s and my friends’ kitchens. A few days later, I was like, ‘all right, let’s give it a try!’”

With an eye roll, she laughs, “Now everyone who comes in here always tells me how much they love our island … Chad has really good design sense and vision. Everything he picked out was perfect.”

Indeed, it’s the focal point of the entire space, built to house hidden stools and complemented by the leather-finished countertops. With the kitchen’s abundance of natural light and oversized windows, the family spends much of its time there.

“I feel so grateful every day, so lucky … I still can’t believe we live here. When I walk in, I sigh and think, I’m home. I want everyone to feel that … to be comfortable. I want to have the house that no one wants to leave.” –Maria Bevington

It all began with their longtime realtor, Ellie Kowalchik. Between Maria and her siblings, Ellie had sold the families a collective six homes.

“We were thinking about moving again, so I called Ellie,” Maria says. “I told her if anything came up, keep us in mind … two months later, she called. The house wasn’t listed yet—she just knew it would be perfect for us.”

John Hill Construction coordinated the project from start to finish—his architect, Mary Cassinelli, created the multistep plan: remove walls to expand and relocate the kitchen; divide the living and dining (and reverse their positions) to create a separate kids’ space and formal dining.

Chad’s ideas: All outlets in the kitchen were hidden in the under-cabinet lighting. USB ports were installed in the craft room. The wood flooring—formerly a combination of wood, tile and stone—was made continuous and consistent.

“It’s all the little touches … I feel like they thought of everything.”