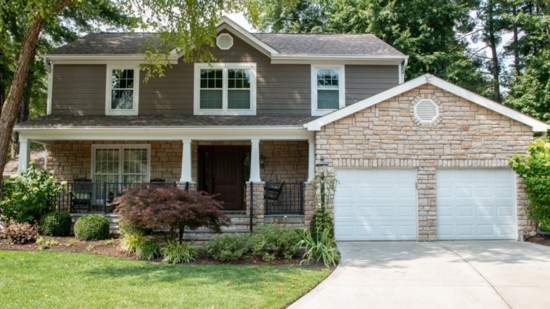 They say never judge a book by its cover. But most of us do anyway, especially when it comes to houses. After all, if you take a drive down just about any street in America, you’ll surely find yourself making mental notes of what you do and don’t like about each house. This phenomenon, aptly called “curb appeal” has had us fascinated since before we had paved roads.

If you feel your home is turning heads for all the wrong reasons, lacks in curb appeal or just needs a little freshening up, Holmes Custom Renovations can make your home stand out from the crowd, like they did for local homeowners Dr. Jeff and Ada Werwa.

According to Ian Holmes, his business grew steadily from a strong foundation in-home repair and word of mouth. Ian started out doing work for friends in the Cincinnati area, moving here with his daughter, Adriana, after marrying his wife, Lori, in the early 2000s. Building on his experiences in residential home construction and historical railroad restoration while living in Connecticut, he felt he knew all the ins and outs of both interior and exterior renovation.

They started Holmes Custom Renovations in 2003, tackling both interior and exterior renovations. Fortunately, business was good—so good, in fact, that Holmes knew he needed to choose sides.

“As the business grew, I realized we needed to focus on one or the other,” Ian says. “I chose exterior, because it seemed the need for contractors for siding, windows and decking was the greatest.”

Luckily, they seem to have made the right choice, eventually growing to 22 employees, including their production team. Lori manages Holmes’ marketing and some sales efforts while Adriana works as their office manager, handling payroll and human resources. They also have four crews of four to six men each, who are all experts in their fields. Holmes manages all renovations with this in-house staff, with the exception of specialized fields such as plumbing or electric, which they contract out.

Having an expert crew means higher customer satisfaction, which leads to repeat clients, like the Werwas.

Dr. Jeff Werwa is the Holmes’ veterinarian, and they got to know each other through his practice.

“We’ve been working on their house on and off for about 10 years, doing multiple projects for them, including siding and roofing,” Ian says. “The most recent is their blue stone front porch with railings, columns and posts, and a new front door.”

The impetus for the front porch renovation was a narrow stairway and rotting posts.

“We went with Holmes because they did our siding and they did such a great job, and then we had them do the roof, so it just seemed natural,” Ada says. “We decided to remodel the front because the posts were getting eaten away and we felt that the front steps were too narrow ... I finally said, ‘it’s time.’”

Though Ian says they didn’t have anything in mind initially other than to achieve a more high-end look to the entry of their home, together they were able to come up with the final vision. They encouraged Ada and Jeff to look through Pinterest and Houzz for front porch styles they liked—their final decision was to go with a more rustic and inviting entry.

Holmes started with the Werwas’ slim porch stairway that leads to the front door. Originally constructed with a tile facade and very thin columns that were not only rotting but had gone out of style, they updated it with a high-end look.

“We came up with the idea to put in stone bases to the columns, plus different columns and wrought-iron-looking railings, and then we doubled the size of their stairs, plus we installed a new front door,” Ian says. “They liked what we did so much, they are going to have their back porch and fire pit done in the same style.”

To help customers such as the Werwas enact their renovation vision, the Holmes team works with each and every client to walk them down an educational path toward the best decision.

“We’re not a high-pressure sales company,” Ian explains. “We’ve already spent a lot of time making the decisions on what the best materials are so people aren’t overwhelmed with multiple choices. We make suggestions on materials, and we leave the selection up to them ... but with guidance, we [typically] go for what’s popular and on-trend.”

Ada’s attitude for home remodeling is simple: “Whatever you do, love it first,” she says. “Know the style that you like and feel comfortable with because it’s going to be there for a long time. If you settle, you’ll always feel that way, but if you love it from the beginning, you’ll love it in the end.”

It was that love—coupled with the satisfaction in a job well done for all the projects Holmes Custom Renovations has done throughout the years—that keeps them coming back.

“The work he does ... he is meticulous,” Jeff says. “You have to realize that it takes time to get things done and get them done properly. Everything he does is top-notch, all the people they work with are great, and I would definitely recommend calling them.”

The Werwas’ entire project was one that was evolving, Ian says, so it took about five to six weeks from start to finish. Typically Holmes has about a four-to-six-month project lead time—that accounts for not only scheduling the labor but also keeps in mind that many of the parts and pieces customers want can take four to six weeks to order. If you’re thinking of starting a project next spring, you’ll want to schedule with them in the fall.

Whether you’re looking to tackle a little or a lot, updating the exterior of your home is worth the effort. No matter the project, Holmes Custom Renovations can help you achieve the curb appeal you crave.