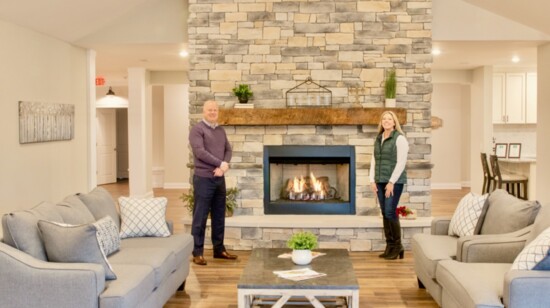 New in the Neighborhood

If you’ve ever looked online for a vacation rental for a large group, your search criteria might have included things like: a bedroom and bathroom for everyone, a large kitchen for entertaining and plenty of recreational space for lounging, watching TV and playing games. Don’t forget an outdoor area for enjoying the sunshine and nature. Essentially, you want to all be together—but at the same time, have the opportunity for escape from all that togetherness. You want the best of both worlds.

While that rental unicorn is usually impossible to find, the founders of Abode Advantage were able to create it in a new kind of shared-housing community for people aged 60 or older.

Abode isn’t just a retirement community, it’s a small residence consisting of 10 private suites that are designed to feel as though you’re living in a home. More important, Abode’s community is intimate enough that real relationships can be formed with those living around you.

“It’s hard to create new relationships in the later years, but our community makes it smoother and ensures you stay connected to your existing relationships,” founding member George Hagan says. “You’re part of a smaller group, so you remain significant and known.”

As one of the founding members, alongside home builder Jody Amburgy and CPA Tom Ruberg, George says he spent more than 25 years working in the senior living environment—and always felt there had to be a better way to create a community for seniors who were looking for an opportunity to enjoy their later years. So he found like-minded partners—and started one.

“Abode Advantage creates that community. This is a new way of shared housing where everyone has a way to contribute, no matter what their ability may be,” George explains.

Although right now there is only one house on the campus, three additional one-story, 9,000-square-foot abodes will be added by the spring of 2022. All four houses will surround a community courtyard, thus creating a neighborhood atmosphere to connect the various residents.

Also, each resident will receive a membership to the Countryside YMCA and its programming, as well as access to several community partners who will share their healthy living expertise with Abode.

Outings will be scheduled according to each resident’s needs. George says Abode will utilize different transportation options such as ride-sharing to accommodate the trips. Every resident receives a $50 a month credit to access their transportation and to make their own plans within the community. “Abode will be an awesome community partner...encouraging all residents to stay active in their connections and community,” he says.

Abode Advantage is all about connected living. That connection extends beyond cozy community quarters and into the residences’ caregivers, who are referred to as Thrive Promoters.

“They’re resilient, and have a heart for service,” George says. “They understand the importance of serving as a partner alongside the resident—instead of taking away a resident’s ability to contribute to their own day-to-day needs. We consider our Thrive Promoters’ service a blend between a concierge and a life coach, as they’re available 24 hours a day, 7 days a week to assist residents with their needs and help eliminate any hassles.”

Thrive Promoters also make sure to attend to residents’ mental health, as Abode’s staff designs programming for the day around each resident to create both an individual and community plan of engagement and significance.

“We encourage focusing on what we can do, instead of limits placed on us because of age or health challenges,” George says. “We take the word ‘retirement’ and create a more engaging sense of ‘re-wirement.’”

Although Abode’s mission and core values center around giving ultimate glory to God, its residents are not required to believe or follow a certain religion, George adds.

Ultimately, Abode Advantage seeks to provide a home that concentrates on ability rather than debility, having the community work alongside its residents to create a prosperous life—which also includes the freedom to live as they choose.