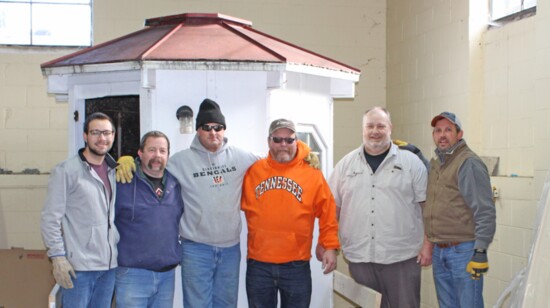 A Journey Across Generations

A small, octagonal military memorial, once positioned in the heart of downtown Loveland, honored military men and women from the area by preserving their names in public display.

And soon, that same memorial—refurbished, renewed—will once again proudly be on display, this time at the Loveland Historical Society.

“More than 400 local men and women who served during WWII are listed on this monument,” says Jim Grethel of the Loveland Historical Society. “Many of the surnames on the monument recall early Loveland families that impacted our city’s history and development into what it is today. It was an easy decision to restore this monument as part of our museum mission—to preserve and share Loveland’s history.”

Designed in 1944 by renowned Cincinnati artist Carl Zimmerman, the memorial’s original design was clever, Jim says, in that “each name was on a single piece of wood ‘shingle’—that way, names could be added as needed.”

Sometime In the early 1950s, however, the monument was relocated to make room for retail development. “This turned out to be a blessing,” Jim points out. “It likely would’ve been destroyed in the severe 1959 flood.” Unfortunately, it was then used as a simple garden shed for about six decades. “By the time we retrieved it, the names were missing, the cupola was missing, the lettering around the rim was missing.” But nearly all of the original framing was still intact.

The story? In September 2018, Mike Brooks of the Loveland-Symmes Fire Department noticed the memorial at an estate sale. After confirming that it was, in fact, the original WWII memorial, its owner, Chris Moore, donated it to the Loveland Museum Center in memory of his father, Kenneth Joseph Moore—the Moores had inherited the memorial when purchasing their farm back in the 1980s. The memorial was then relocated in November 2018.

That’s when Jim reached out to John Hill of John Hill Construction for restoration help. Not only was John’s father a veteran, but most of his JHC employees are vets.

In fact, John’s son Ben takes his middle name from John’s father, Vincent P. Hill. “My father served in the Navy in WWII,” John reports. “He passed away in 1984 and never spoke a word to me about the War or his service … this project has caused me to revisit those things. We have his dog tags and copies of his honorable discharge—he saw action on the Battleship USS Arkansas, including the D-Day invasion of Normandy, Operation Dragon in the Mediterranean, and the battles for Iwo Jima and Okinawa.”

No surprise, other vets and military supporters at JHC are involved. Bill Bryant, the restoration project’s superintendent, spent 5 years in the 82nd Airborne in the 325 Airborne Combat team—and still meets annually with his fellow veterans. Senior estimator, William “Bill” Kelley, served in the U.S. Air Force for 20 years—traveling around the Far East’s Malaysia, Okinawa, Philippines and Korea, and living in Japan before retiring from service in 1994. Alan (AJ) Johnson, another JHC superintendent, also served in the U.S. Army.

Although John’s father’s name wasn’t on the original memorial (he wasn’t a Loveland resident at the time), John recently learned it would be added to the refurbished work. “It chokes me up,” he says. “We’re honored to do this work—to recognize this ‘Greatest Generation.’”

The World War II Honor Roll restoration is on track for a Memorial Day dedication at its new location—just outside the Loveland Historical Society.

“The museum’s intention was to restore it as close as possible to the original design, but with modern materials to make it easier to maintain,” Jim says.

The new location will allow the memorial to “stand for generations to come,” John says. “It’s important that the men and women of Loveland be recognized and remembered for their service.”

It’s important that the men and women of Loveland be recognized and remembered for their service.