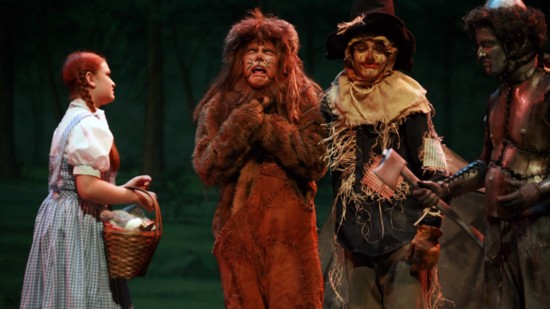 Acting Up continues to offer community theater for young people in the wake of a devastating fire.

Fifteen years ago, a group of parents whose children participated in local theater productions noticed a pressing need. The interest in youth theater was outpacing the available parts in local productions in Mason. They wanted to expand opportunities for youth to act, sing and dance, so they started their own non-profit community theater group, Acting Up.

“We thought that we could put together a great community theater organization that was family-based,” says Brent Peebles, one of the founders of Acting Up.

Their program, not connected to one school or restricted to a certain geographical area, has a unique focus on family involvement.

“We’re bringing in a diverse group of young people ages six to 18 from all over the area,” Brent explains. “We always ask their parents to get involved: they can help with costumes or sets or with promoting the production. We have found that this helps everyone enjoy the show more. The parents say ‘I painted that set-piece,’ or ‘I sewed that costume,’ and it becomes a more fulfilling experience.”

The result of all this combined effort has been rewarding opportunities for young people and award-winning performances for many years. They’ve put on a wide variety of shows, from Matilda and The Addams Family to classics like The Wizard of Oz.

Over the years, Brent has seen how theater can be a source of learning for the many young people who participate.

“What I like about it is that it makes a big impact on kids’ lives at an important time for them. A lot of people, even years later, can remember the show, their role, what they did on stage. Doing theater as an adult doesn’t have the same impact as it does at that stage of your life,” says Brent. “We see these kids grow up in front of us; some start off kind of shy, a bit awkward, but their confidence grows immensely. They perform in front of 500-700 people, which builds their public speaking ability.”

The life skills the young people gain all culminates in the excitement and anticipation that leads to opening night.

“It’s a lot of work to put on one of these musicals,” Brent admits. “There are a lot of challenging moments, and our casts are usually 70 young people and their families. We love opening night. It’s when everything comes together. We have an amazing moment when the kids get to be on stage and perform. The energy is fantastic, and you can see the smiles on everyone’s faces. They get to see all their hard work realized.”

The word has spread about Acting Up and as a result, kids from all over the community come to Mason to participate.

“When we started the group, the one thing we never anticipated was that by making ourselves a community theater group, we would draw kids from all over the Cincinnati area and far beyond,” says Brent. “We have kids from Indiana, Kentucky, and Dayton, and they all become friends. Now they know people doing theater not just here in Mason, but in Milford and the West Side and down in Northern Kentucky. We love to see them make connections. People really support theater in this area, and we couldn’t do it without the Mason community.”

They learned how much community matters this past June when a tragic fire in the building adjacent to their main storage facility caused smoke damage. It harmed most of their set pieces and a wide variety of costumes. While the loss was immense, the support from the Greater Cincinnati area has been incredible.

“The community was amazing; people from Mason and all around Cincinnati, including a lot of our patrons, helped us out. Even people who haven’t had a child in our productions for five or six years now,” says Brent. “Community theater in Cincinnati is very popular, and a number of these other theater groups gave us things we needed, like platforms and set pieces. We ended up rebuilding a lot of basic set pieces using gifts from other theater groups. It was heartwarming.”

Brent is directing the spring show this year, a musical based on the childhood classic book, Tuck Everlasting.

“I really like the message of Tuck Everlasting; I think it’s great for our young performers and the young audiences that will come see it,” says Brent. “It really asks a question: what is life about? Is it about living as long as you can, or the quality of the time that you have? I think that’s something that is valuable at any age, but especially when you are younger and trying to figure out what to do with your life.”

Brent also notes that the choreography and music for the show are particularly beautiful, adding to the excellent message. Tickets for Tuck Everlasting are available on their website.

While the rebuilding efforts over the past few months have been swift, they can always use support in the form of donations and volunteers. For specific donation needs, please see their website ActingUp.com.