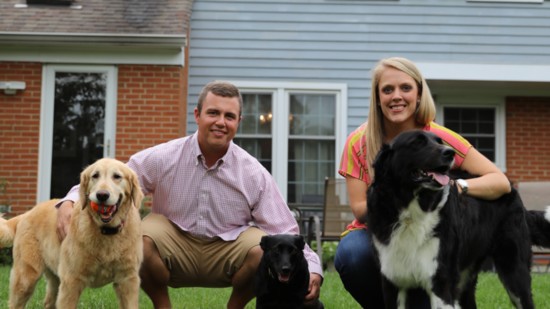 West Chester’s Nicole Briggs started Peaches Bully Rescue in September 2017. She wanted to help one or two dogs a month find their forever home. Instead, Briggs has helped adopt more than 100 dogs in just 11 months.

What is Peaches Bully Rescue?

Peaches is a foster-based rescue that provides a safe-haven for dogs of the bully breeds. Our foster families take in the dogs until they’re given to their permanent home. We provide all the supplies and they give them a loving home. We get about six to eight requests a week to rescue dogs, some from local shelters, others are owner-surrenders.

What inspired you to start the rescue?

I’ve sat on the board of other bulldog rescues and really felt there was a need missing. I wanted to help dogs that are mixed who are maybe getting overlooked because they aren’t purebreds.

How can someone adopt or foster a rescue from Peaches?

Our adoption process is very detailed, including an application, background check, vet check, reference check and meet-and-greet. It might seem extreme, but we want to make sure we’re placing these dogs in their forever home. To become a foster family, you go through a similar application process. We have trainers who help train fosters so the dogs are well cared for during their transition. My biggest problem right now is I don’t have enough foster homes. That dictates how many dogs we can take.

Are your own dogs rescues?

Yes, all four of them are from different rescues. Moo is 4, Tessa is 10, Austin is 7 and Calvin is a year and a half. After I got my first bulldog, I just fell in love with him. PeachesBullyRescue.com

Rory is more than just a pet for Corrine Gogolewski, a seventh grader at Plains Junior School. Although they’ve known each other for less than a year, Rory is ready to save Corrine’s life at any moment. Diagnosed with epilepsy, Corrine relies on Rory to alert her and her family when she’s about to have a seizure.

How does Rory help you?

How does he know to alert you?

Through scent he detects the seizure activity. If he starts to detect it, he will start licking me and then my parents know we have an alert window before the seizure will happen. He will actually bark if he sees me having a seizure, and that’s the only time he will ever bark. He knows that barking is reserved for when I’m having a seizure. It’s kind of like a game for him.

Where did Rory learn this?

We got Rory from 4 Paws for Ability, where they start training dogs at birth. The seizure scent is universal, just like the diabetic scent, so he was trained to be aware of the scent and knows when it increases or decreases. My family and I went to 4 Paws for two weeks last year, so we could be trained on his commands and how to work with him.

What do your friends and your twin sister think of Rory?

Everyone loves him. Since he goes everywhere with me, everyone has gotten to know him. He even goes to soccer practice and he’s become the mascot for everything.

West Chester realtor Mike Weghorst has always loved dogs. His wife, Emily, wasn’t too sure about them when they first began dating. However, she quickly fell in love and now the pair is married with three dogs: Hailey, Boots and Lady.

Mike, when did you become a dog lover?

We always had dogs growing up. The only time I never lived with a dog was in college and my parents constantly hounded me to not get a dog while I was in college. So, my first purchase right after I graduated was Hailey.

Are your dogs rescues?

Lady and Boots are rescues from HART (Humane Animal Rescue Team of Cincinnati). HART provides a great and positive adoption experience. What we liked best is all the rescues are in foster homes with other people and pets, rather than being locked in kennels. If my memory serves me right, Boots was rescued from a kill shelter and Lady was found wandering on the side of the road.

Hailey is a typical retriever who just wants to play ball, catch the frisbee, or swim all day long. She’s the oldest but by far has the most energy out of all of them. Boots is more laid-back. Her favorite thing to do is lay outside, especially on a cool day. Lady loves to go on walks. There’s nothing that gets her more excited than seeing the leach come out.

What do you love most about your pups?

The unconditional love, no doubt. They are a lot of work but so worth it.

Mike is a realtor through Stanley Realty, while Emily is a nurse practitioner at Cincinnati Children's Hospital. Mike has a strong love for community and wants to help families and their pets find their forever homes, which is why he named his business Move to West Chester Liberty. MoveToWestChesterLiberty.com

Jacky Jones had four cats when she met husband Brad Huntington. Lucky for her, Brad grew up loving cats and dogs, and the pair quickly fell in love with building a family of fur-babies.

Jacky, when did you get your first cat?
My family has always had cats. When I was born, my parents had Charlie and Maxine. Max was the most patient cat; she would let us dress her up and push her around in buggies. She was truly one of a kind. I fell in love with rescuing cats and hand-raising orphaned ones when I was about 10. My mother found two 3-day-old kittens. She showed my brother and me how to bottle feed them and potty them. We both have gone on to rescue and adopt cats ever since.

How many cats do you have?

Brad and I have four cats: Louise is 14, Lola is 7, Charlotte (called Chuck) is also 7, and Beatrix is 2 1/2 months. We recently lost our kitten Tad, who we rescued as a stray in Cincinnati at just three weeks old. He was extremely sick, and we fought for him like he was any human child of ours. These animals give us so much trust and love, and I hope we can give them the same back.

What do you love to do most about them?

We love getting out their toys and laser pointer and encouraging them to hunt and play. Although, the best is when we go to bed at night. All the older cats cuddle in with us until we fall asleep.

Any recommendations for people who want to rescue?

Go for it! Make sure you educate yourself on what a kitten needs before you bring one into your home. Rescue cats are the best.

When Lisa Bacu and her husband, Ron, decided it was time to get a family dog, they asked their kids for input on the breed and size of the dog. The family eventually settled on 120-pound Sancho, an English Mastiff. The Bacu family rescued Sancho a little more than seven years ago when he was just six weeks old.

How did you come up with the name Sancho?

The kids each picked a name for him, and then Ron and I made the final choice. His official name is Starbuck Jack Sancho Bacu, but of course, we call him Sancho.

Yes, we worked hard with him when he was a puppy to train him well. We knew that he could potentially outweigh me or even my husband, so we made sure he knew who was alpha in his pack. He is very well behaved and obeys beautifully. This is extremely important with a giant breed since the dog could do some serious injury to any family member, particularly children, if not well trained.

What does Sancho love to do?