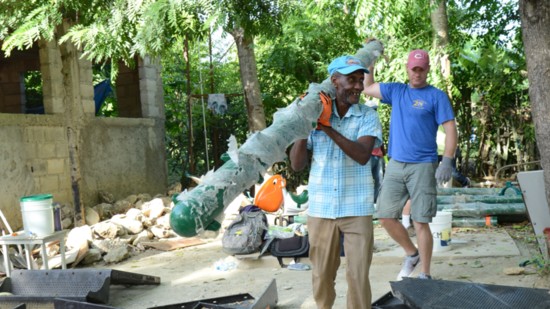 When a 7.0 magnitude earthquake hit Haiti in 2010, it was a devastating shift in the earth’s plates. There was another shift later that year when three friends put their heads together for recovery efforts. Instead of destruction, this shift brought a monumental impact on a village of Haitian children.

Tony Harris returned home from a church trip to rebuild Haiti with stories that sparked interest from his wife Christin Harris and friend Shari Miller. Christin and Shari started sewing and selling shirts for toddlers with the goal of raising enough funds to sponsor one Haitian child to go to school. It was the foundation of Made to Love, a Hamilton boutique on a mission.

The trio of advocates didn’t choose their mission—it was more like the mission chose them.

“When we started it, we didn’t know our mission was jobs and education,” says Tony. “It has evolved.”

“Who knew this was going to lead to nine years?” Shari laughs, gesturing to photos of their toddler t-shirts.

The Made to Love store is modeled after a program led by Dr. Kelly Crowdis, a long-term missionary in Haiti.

“She would go buy stuff from artisans and resell it to those who were there after the earthquake to raise money to help sponsor kids to go to school. That spurred our interest in trying to find a way to get people education,” Tony explains.

Kelly now partners with the Made to Love team onsite in Haiti, a direct connection to the people they serve.

When all three of them went back to the country in 2012, they met a Haitian father who had lost his foot to an earthquake injury. Tony, Christin and Shari sponsored his daughter to go to school and then raised funds to get him a job by paying for his training in jewelry artistry. The paper-bead jewelry made by the father was the first Haitian-made product they sold.

“People really responded to the direct connection,” Shari says. “People wanted a way to help, but they didn’t know how.”

On visits to Haiti, Tony, Christin and Shari meet with village leaders to determine how to best help. They seek the most effective ways to support the Haitian economy, building a sustainable system.

“Our goal is to work our way out of Haiti needing us,” Tony shares.

“We keep our hands off of the school as much as possible. We want them to be the very best Haitian school that they can,” says Shari. “If we can buy what the students need in Haiti and stimulate the economy, we can make a much bigger impact."

To date, Made to Love has extended its reach from helping one Haitian child to schooling 500 children. With donations and store income, they hire Haitian builders to expand the Garden of Eden School as needed, currently made up of four buildings and a playground, serving grades one through eight. They employ and pay salaries for a full teaching staff and supply the school with necessary equipment like computers, solar panels, a router for internet service and more.

“The bulk of our money goes right back into our programs,” Tony explains. “As a volunteer nonprofit, there’s not a salary or payroll."

The mission of Made to Love continues to evolve and grow.

“One of the things we are thinking about for the future is a trade program,” Christin says. “It is important to give the kids the opportunity to dream.”

Their focus is clear: to keep making steps to help, no matter what that looks like. Made to Love creates aftershocks of love in post-earthquake Haiti: education, jobs, opportunity and most importantly, hope.

Shop with a Purpose

Your holiday shopping dollars make a difference at Made to Love. Shop their extended holiday hours in November and December, Monday-Friday, 10 a.m.-6 p.m., and Saturdays, 10 a.m.-3 p.m.

Made to Love will have a booth at the annual Greater Cincinnati Holiday Market, November 8-10, at Duke Convention Center located in Cincinnati. CincinnatiHolidayMarket.com