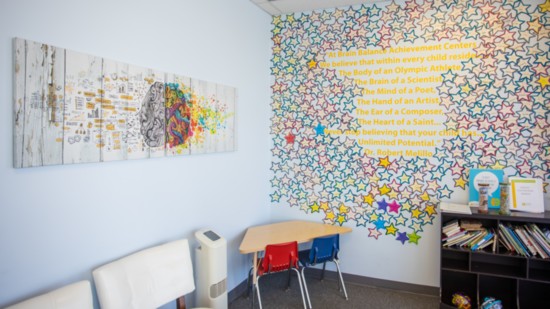 An Act of Balance

Achievement: it’s often defined as A’s on a report card, a 4.0 GPA or winning the coveted title of class president. It can be a mix of academic and social prowess that students seek from their first day of kindergarten all the way through graduation. But what happens when things are slightly off-balance and the conventional education roadmap has your child veering emotionally off course?

Enter Brain Balance, a comprehensive, drug-free training program designed to help kids improve focus, behavior, social skills, anxiety and academic performance. The outside-the-box approach goes beyond traditional, mainstream tactics and helps children get to the root of their challenges—instead of masking them.

The program begins with an assessment that tests 940+ functions of the brain—the detailed results then help explain why a child could be struggling with ADHD, anxiety, dyslexia, ODD, Tourette’s syndrome, autism or other neurological disorders. The results reveal gaps that have occurred in brain development, as well as which hemisphere of the brain (right or left?) is “behind” developmentally. If the hemispheres aren’t working together, a child cannot function at his or her age level. Once gaps in brain development are identified, the work needed to connect the two hemispheres together (and working at the same age level) can begin—and that’s where Brain Balance shines. Balancing the brain takes an average of five months. Following this, each child is monitored for a full year to ensure the work—the integration of that child’s brain—has stuck.

Sherry Martz, current owner of Brain Balance, saw this balance happen firsthand with her son, Dylan. From a young age, Dylan struggled with anxiety, depression and panic attacks. After attending Brain Balance for three months, he started to understand his world better and his anxiety diminished. Brain Balance has been helping kids like Dylan since 2010 ... thanks to the impact on his life, Sherry knew she had to be a part of this life-changing program, so she purchased the Loveland franchise location shortly after he completed the program in 2017.

“The path his life was taking made a complete turn in a healthy direction,” Sherry says. “I saw an amazing transformation in him. His anxiety was debilitating in so many ways—including interacting with his brothers and grandparents, trying new experiences and eating new things. The program enabled my son’s brain to bloom so he could be who he was meant to be.”

While Sherry can empathize with parents who often blame themselves for their child’s struggles, she maintains it’s no one’s fault; however, the change they want to see in their child requires a true team effort—it doesn’t happen automatically.

“This isn’t a place to drop a child off and say, ‘fix my child,’” she says. Parents assist daily with exercises at home, nutrition and bringing their child to on-site sessions—parents’ involvement not only helps the child, it also changes the dynamics of the family.

“When a family member is struggling, it affects everyone in the family,” she says. “When that struggling family member gets help, the family is then transformed. The time, effort and cost are more than worth it, because the program is life changing. This generation of kids has been hit hard by changes in our environment, societal fears and the effect technology has had on their brains. So parents turn to OT, PT, tutoring and behavior therapy—but none of that will work until you get into the infant brain and see how active it is in the child’s daily life.”

This “infant brain” is where the root issues lie, Sherry explains. Brain Balance retrains the brain and creates neural connections that were never there previously—a “whole child approach.” The active infant brain hinders development and the ability to reach each level of developmental milestones. Beyond academics, behavior, social interactions or emotions, Brain Balance focuses on the development of both the child and their brain from the time they were born. By connecting the brain and the body to the appropriate age level, a child is enabled to function—learning, interacting with friends or regulating emotions is no longer cumbersome or off course. Most important, it’s all accomplished without medication.

“Medication is a Band-Aid—it enables the child to function day-to-day … but Brain Balance goes beyond what any medication or therapy can do,” Sherry says.

This holistic approach is ideal for children ages 4­–17, as well as young adults 18–24. An adult program will be available soon.

“Watching the connections begin to form as a child comes through the program is my favorite aspect of Brain Balance,” Sherry says. “A child will come in and won’t connect with us with their eyes or verbal communication. As they attend sessions, they begin to understand their world better; we’ll see eye contact and hear them start to talk a little—by the end he or she is a chatterbox. That’s what makes us smile. Another child’s brain has bloomed—and the connections are there for a better life.”

The program enabled my son’s brain to bloom so he could be who he was meant to be.