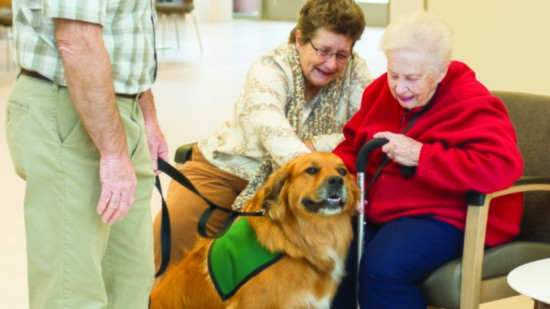 Most people love the excited, panting grin of a dog as it walks up to meet them. When people at our local hospitals see Bella coming, their faces relax even when they aren’t having a good day. The calming energy of this Great Pyrenees/Golden Retriever mix breaks through the patients’ tough circumstances and keeps them present in the moment, just scratching a dog’s head.

West Chester couple Lisa and Steve Ackels began the process of training therapy dogs when they adopted their dog Henry in 2008. Lisa witnessed therapy dogs offering comfort when she was visiting her mother in hospice and was deeply moved. Since then, the Ackels have logged hundreds of visits to hospitals, nursing homes, schools, and other places where people could use a little cheer.

Their first therapy dog, Henry, was a Golden Retriever who had a spellbinding quality that drew people in, making them want to be close to him. While therapy dogs may seem like they are simply dogs with great temperaments, they are intensively trained and tested to ensure they will provide safe and loving interactions.

“We took Henry to a training class through Therapy Pets of Greater Cincinnati, and we became insured through Pet Partners, a national group,” Lisa says. “Then each handler has to pass a test with the dogs, and the dogs have to be re-tested every two years.”

Therapy dogs are tested on how well they obey commands, how much they are able to resist something that falls on the ground and generally how well they react to surprising noises, new dogs and unfamiliar people. Henry passed with flying colors.

When Henry was certified, Lisa was enduring her own battle with kidney cancer. During their journey together, she had some days where she could take Henry to visit special needs classrooms of local schools as well as hospitals around the area.

“It kept things in such perspective for me. There were so many people who were in worse situations than I was,” she says. “Instead of sitting home by myself, scared and depressed, this work has turned my life around and taught me gratitude. Even the littlest things make me feel grateful.”

Henry and Lisa would also visit the library and let children read books to the dog; children who would otherwise refuse to attempt to read would readily focus when Henry was paying attention.

Henry passed away in January of 2018, with a legacy of more than 400 therapy visits. Lisa’s husband Steve has since trained Bella, who has become their main therapy dog as they raise a new rescue dog, Murphy, to eventually also offer therapy.

The therapy dogs often create a connection between the handlers and people who are experiencing extreme pain. Lisa and Steve have seen people in grief bury their faces in the fur of these large, fluffy dogs—and the dogs accept and snuggle them back, offering wordless and profound comfort.

“The dogs really do take on the emotions, they feel the emotion that the people feel, so they go home quite exhausted.” –Lisa Ackels

Occasionally, people are nervous around the dogs, and it usually comes from bad experiences with dogs that hadn’t received therapy dog training. Over time, many people grow to trust therapy dogs even when they haven’t had good relationships with dogs in the past.

While the process of training and acquiring insurance for the therapy dogs is extensive, Lisa points out that not everyone has to have their own therapy dog in order to provide comfort and interaction to people at hospitals.

“Being a volunteer can be a big or small commitment; it doesn’t have to be all your time,” she says. “And you can do a lot of good just by sitting and talking with someone.”

Watching Bella pad around a waiting room, anyone can see that a benefit of the therapy dog is that she starts a conversation, making it possible for the volunteer handler and the person in the hospital to share a moment together.

“You don’t have to give a million dollars. You can go make someone smile,” Lisa says. “There’s a place for everybody; don’t think you don’t have something to offer, because you do.”

Thank you to The Christ Hospital’s Liberty Campus for letting us take photos at their location.