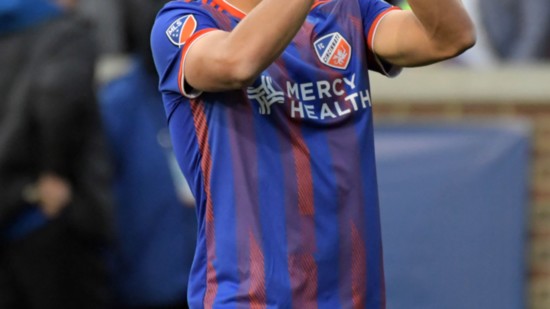 From Lakota to the Pros

FC Cincinnati soccer player and West Chester native Nick Hagglund learned to love soccer on the field at Liberty Junior School, with his dad coaching him to love the game. Dad taught Nick about giving 110 percent and enjoying yourself on the field.

“He’s the most fun guy ever,” Nick says.

Nick made the decision at the young age of six that one day he would play professional soccer. So he did. After playing five years for FC Toronto, he watched intently as Cincinnati formed a team, then traded before last season.

Returning to his hometown was a dream. Nick remembers practices at Keehner Park. He calls himself an active kid, typically playing four to five sports at a time. He remembers his past coaches who made him who he is today: Steve McCullough, Rick Duff, Dan Lueking and Lakota West coach Rick Cooper.

“[Rick Cooper] was the first coach that yelled at me, but in a good way… in a work-your-butt-off kind of way,” Nick says.

During his early years in high school, he was well-known for running the Lakota West track in his free time in preparation for the two-mile test required to make the varsity soccer team. Cross-training was a significant contributor to wellness for Nick from a young age, and he still values it today.

“There are benefits in using different muscles in different types of scenarios. I do speed and acceleration training. I never did weights when I was a young athlete before high school,” he says. In the off-season, Nick takes every opportunity he can to practice yoga, pilates, boxing, rock climbing and CrossFit.

After he graduated in 2010 from Lakota West, he played for Xavier University where he, along with his teammates, turned the program into a powerhouse. Nick pinpoints Xavier coach Andy Fleming’s culture change along with exemplary player effort as key factors to the turnaround. Coach Fleming taught the athletes to fight against selfishness and play as a team.

Nick’s first few years in professional soccer were not easy, even though in his first season he played 25 games and was nominated Rookie of the Year. From there, he was dropped from the lineup and worked through appendix surgery and injuries. Experiences from his youth brought strength in the tough times.

“There were not a lot of good days, but I put my head down and worked hard,” Nick shares. ”Take your shovel to work and trudge... there’s an opportunity every day to get better.”

The future is bright as he enters his second season at FC Cincinnati with great potential ahead. He is living in Oakley with his wife Mary, his childhood friend and neighbor in West Chester, and their young daughter.

“My wife is grounding for me,” he says. “The pro soccer world is grueling. My wife could always point me in the right direction, to what’s important.”

Nick credits his wife with handling everything when he’s gone, and calls himself an “all-hands-on” dad and husband when he’s home.

His keys to success and wellness are effort, attitude and pursuing a “growth mindset.”

“Making a mistake is never a mistake,” Nick says.  That’s why I’m where I am today.”

Being “physically and mentally well” is key to Ashley Evans’ success as a professional volleyball player. The 2013 Lakota East graduate started playing at the young age of eight, and just fulfilled her ultimate dream of training with the USA Women’s National Team last summer after being invited to compete in the NORCECA Champions Cup at the Olympic Training Center in Colorado Springs, CO, where she earned a gold medal.

“Nothing compares to wearing the red, white and blue and representing your country at the highest level,” Ashley says.

Ashley got her start as a young athlete at Liberty Junior School and at Cincy Classics Volleyball Club, where she trained throughout her childhood. She carries fond memories of playing sports at Voice of America MetroPark, Lakota schools and Liberty Park, with coaches who inspired her. As a 10-year-old, Ashley says she was “blessed” to train with her mother, a former collegiate volleyball player, for “four wonderful years.” At Liberty Junior, her team won the league, which made for the “perfect transition” to high school competition, where she made the varsity team as a freshman and later was a part of a GMC championship team.

“Being named an ‘Under Armour High School All American’ was the cherry on top of a successful high school career,” she says. She committed to playing Division I volleyball at Purdue University as a sophomore.

However, she suffered a knee injury after high school. With months of tough rehab and determination, she was ready to start her college career on time.

“I will be forever grateful for that experience that not only granted me a chance to play at the highest level collegiately, but more importantly, it granted me an education that will undoubtedly take me farther than sports ever will in the grand scheme of life,” the collegiate AVCA All-American says. She is currently in her second professional season overseas, playing in Békéscaba, Hungary.  Last year, she competed in Spain.

Off the volleyball court, Ashley stays balanced and grounded by giving time and attention to her faith, cooking, reading and playing the piano. She also never underestimates the power of journaling and personal reflection as a means of improvement. Her advice to the average American is to get moving and to appreciate how strong and capable the human body is. To young athletes, she recommends realizing the importance of being an all-around student and athlete.

“Sports will only take you so far in life,” Ashley says. “Finding a balance between athletic activities and those outside of training with family and friends will pay dividends later on.”