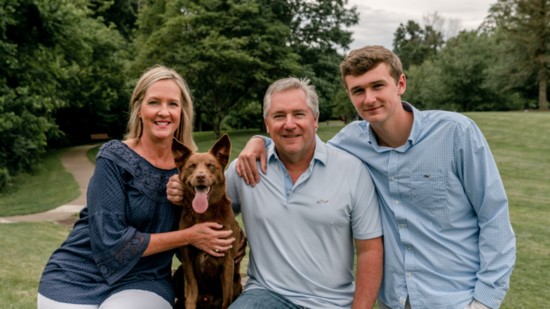 Rescue to Redemption, One Dog’s Journey Back to Life … and Love

Sampson is a special dog—not just because of his silky short hair, pointed perky ears or oh-so-sweet puppy dog eyes. It’s hard to imagine the abuse he suffered in a cramped crate without food or water. Covered with raw spots, no muscle tone in his rear legs, he weighed only 15 pounds. The veterinarian gave him just days to live.

But that’s not what fate had in store for him. Missy Mikula spotted him on Petfinder—one look at his picture had her reaching out. Missy and Sampson’s foster mom met … and they both knew right away.

“But first we had to talk my husband, Albert, into it,” Missy says.

Love prevailed. Sampson came to them as “Sammy,” but Albert rechristened him Sampson. Scared and starved, Sampson would hurriedly, ravenously devour his food. An untreated broken bone left him with a crooked leg and a damaged spirit. But recovery began, slow and sure.

When Missy saw our contest for a cover dog, she went right to Albert.

“We’re entering Sampson, and he’s going to win,” Albert looked at her like she had six heads.

But she was right—her words about Sampson’s stunning transformation from abused, tail-down puppy to “the most loving, affectionate, loyal, smart, trusting rescue dog ever” had us convinced from the get-go. A photo showdown on social media (against fellow rescue Henry, our second-place doggo) and Sampson’s title was set.

The Mikulas' son, Cam, had wanted a dog “that did something.” “Oh, he does something,” Cam laughs now.

A feat we witnessed firsthand when we met this Australian Kelpie and his amazing family. It was easy to see Sampson’s joy shining through—and the love this trio shares with their four-legged member of the family.

“We owe him the best day every day.”

A trio happily transformed into the sweetest of foursomes, their license plate says it all: BST 2 RSQ.