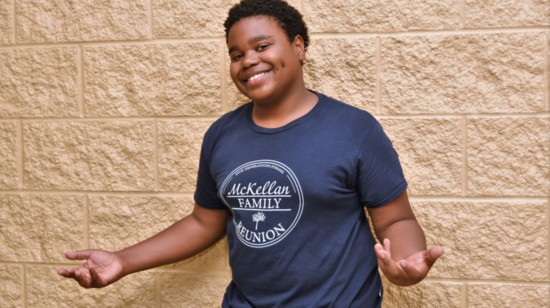 Photography by Gina Breyfogle and Provided

Lance Alexander is the quintessential boy next door. There’s a reason he plays a convincing good neighbor on television—it’s a role he’s been playing all of his life. Growing up in his West Chester neighborhood, he was known as a friendly, helpful and kind kid with a smile that lights up a room. Now, that same smile is lighting up screens across America in Netflix’s comedy series, “Family Reunion.”

Lance’s dream of acting became a reality in 2017 when a series of encouraging contests led him to the chance to pick up an agent and pursue auditions for television work in Los Angeles. He pitched the idea to his parents, and they agreed to take a leap of faith. After a couple of years of living apart and commuting between Ohio and California, his whole family—Mom, Angela; Dad, Ernest, and older sister Gabrielle—made the move to Hollywood.

“I saw people on TV and thought, ‘I can do that!’ It looked like a lot of fun, and it is,” Lance says. “I am grateful for my family’s support. They’ve made so many sacrifices: my sister, she moved schools, my dad transferred jobs to L.A., but we are all together now,” he adds.

The unique experience of chasing his dream as a 14-year-old is teaching Lance the difference between a house and a home: home is where your family is.

“I miss my house!” he exclaims. “Moving from our house to a townhouse apartment and downsizing was hard for all of us. But it is most important to have a home again, not just a house,” he says.

After a stint on “Raven’s Home” and some commercials, Lance landed the role of Elvis Maybury, a likeable teen neighbor to the McKellans, an urban family that makes a cross-country move to small-town Georgia. The southern accent and antics may be exaggerated, but real-life Lance could have found himself in similar situations to Elvis any day of the week in our suburb: mowing lawns for cash, hanging out with friends at church or flirting with the new girl.

“Elvis is optimistic, fun-loving, loves God—you can find him at church every Sunday,” Lance explains. “We are very similar. Like him, I’m optimistic—with auditions, I am always hopeful that the next one will be my opportunity. And we are both entrepreneurs,” he adds with his winning smile.

Lance comes home to West Chester as often as his schedule allows.

“It is really nice being home. I’d like to come back more often,” he explains. “I have been able to stay in touch pretty well, but it’s hard with the three-hour time difference. It helps that I get to play games like Fortnite with Ohio friends. Anytime I get a message or hear from anyone, I respond right away,” says Lance.

This summer, he came bearing gifts: a $5,000 donation to Lakota’s Union Elementary, to help renovate the Innovation Hub. The star’s former school named the video recording room after him.

“I think it’s really cool that people can create their own ads or their own commercials,” Lance says. “It gives kids like me an opportunity. It gives them a first step.”

In September, Netflix announced that “Family Reunion” was renewed for a second season. That’s great news for Lance and his television family. Lance couldn’t be more thankful for the opportunity.

“After you go out for 100 auditions, you may not get called for even half, or even a fourth. I try to stay optimistic and ready for the next one. I am grateful,” he says.