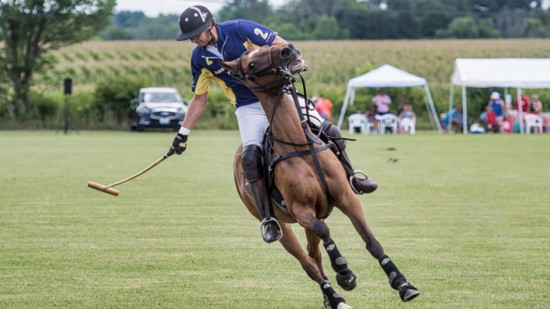 Ponies & Polo: The Sport of Kings Has Come a Long Way in Loveland

Tradition. It’s the heart of all sports. Whether you’re breaking in a new glove, gearing up before the big game, or donning your favorite player’s jersey … there’s nothing quite like being a fan on the sidelines or a player stepping onto the field. Taking in the energy around you and hoping for victory—it’s the blood that runs through every athlete’s veins.

And for the Cincinnati Polo Club, tradition runs deep. In a city that once fielded three polo clubs (dating back to 1913), the current (now solo) organization began in 2010 with only a handful of members and no field whatsoever. Today? Sixteen playing members and a cadre of social devotees—ranging from high schoolers to retirees, males and females, equine enthusiasts and lessees of the beautiful animals—who simply love the game. Oh, and of course 27 horses who do, too … all coming together on the team’s home turf right here in Loveland.

Torie Front, President of the CPC, is no stranger to the ins and outs of polo. As a previous Columbus Polo Club member for 15 years, she and her husband felt it only made sense to seek out the CPC upon moving here. Carting a truck with a trailer and multiple horses, the competition, camaraderie, and awe of the horses and relationships that polo brings promised nothing but memories in the making.

The CPC is in the Mid-States Circuit, which includes parts of New York, Pennsylvania, Michigan, Indiana, Ohio and Kentucky. For those of us completely in the dark about this born-of Asia sport, here’s a brief history lesson:

Polo is a team sport, with four players on each team. Each match consists of four to six chukkas or chukkers (periods) that last as long as 7½ minutes each—played on a regulation polo field (the area of about 9 American football fields). A horn blows at the end of 7 minutes to signal to players that 30 seconds remain. During that 30 seconds, play continues until a team scores or the ball hits the sideboards. If neither occurs within 30 seconds, the horn blows twice to signal the end of the chukker. The goal? Typical to many sports: hit the ball between two goalposts; the team scoring the most goals wins. Not to be overlooked is the polo pony itself—these horses are skilled at sprinting, sudden halts, quick and accurate turns, and pushing others out of their way.

“While the crowd gets excited when someone has a breakaway and gallops down the field hitting the ball, the sport is truly played best when the four people wearing the same colored jersey work together passing the ball and taking out the other team,” Torie says.

Polo is the only full-contact sport where men and women compete at the same time … it even made an Olympic appearance once. In fact, polo predates most sports, with evidence of a version of polo being played in Persia, circa 6th century BC.

As for who should attend? That’s easy: everyone. Families or singles, old or young, even dog lovers—set up your lawn chairs, pop-a-squat on a picnic blanket, tailgate with champagne and fine cheeses, and enjoy a beautiful summer polo day in Loveland.

“If I had to describe the CPC in three words, I’d choose exciting, accessible and real,” Torie says. “People can attend a polo match in their most comfortable clothing, or get as dressed up as they like.”

It isn’t just the horses and the exciting play the people come for—it’s the experience (and perhaps wanting to vicariously live out that memorable Pretty Woman scene).

“At halftime, spectators are invited out onto the field to ‘stomp the divots.’ Divots are chunks of turf that have been kicked up by the running horses, and it helps the game to have a smooth playing surface.” You know the rest, right? “Beware … don’t stomp the steaming divot.”

With merch tents, tailgating and hat contests, plus foot mallet polo (with stick horses) and plenty of food and drink, there’s truly something for any age. Even better, if you’re interested in learning how to play polo yourself, you can sign up for a clinic.

But best of all? The CPC events help raise money and awareness for local charities. Each home game features a charity in need—and in turn, the charity sells raffles and refreshments to help support their worthy cause.

Torie, and the rest of the team, is accustomed to worthy causes—the CPC is volunteer-run … and pulling off a polo season takes help from everyone.

“We have different committees in charge of things like our charity partners, caring for the polo field, everything that happens on the field on game day, promotions, sponsorships …”

And in light of the events (and changes) surrounding COVID-19, ensuring the game lives on is high on the priority list for Torie.

“I hope we get great crowds at each of our home games [beginning at the end of June],” she says. “With lots of spectators, it helps the local charity of the day have a good experience, and the more people see polo, the more they get hooked.”

It’s this positive mentality that has been the backbone of the club since its inception a decade ago. In 2010, the CPC didn’t even have a field on which to play—they practiced on both Goshen and Batavia fields for seven years until the Wygle family invited the club to Chatsworth Polo Field in Loveland, the perfect setting for the Mid-States Circuit, and the club’s current home.

“When the sidelines are full, the charity is having a good day, the sun is shining (but there are a few clouds to keep it cool), my team is playing like a team, and I score a goal—that’s what I like about polo,” Torie says.

Bump. A player is permitted to ride into another player so as to spoil their shot.

Chukkas/Chukkers. Periods that make up a polo match.

Grooms. Individuals who take care of the day-to-day responsibilities of feeding, cleaning, tacking, prepping, doctoring, transporting and caring for the polo ponies.

Handicaps. Similar to a rating—the higher a person is rated, the better the player is. Handicaps range from -2 to 10, with 10 goals being the best.

Mallet. Also known as a “stick.” The shaft is made from a bamboo shoot, and the head from either the bamboo root or a hard wood such as maple. Mallets vary in length from 48–54 inches and are very flexible in comparison to a golf club or a hockey stick.

Near Side. The left-hand side of the horse.

Off Side. The right-hand side of the horse.

Ride Off. This occurs when two riders make contact and attempt to push each other off the line of the ball so as to prevent the other from striking. The ponies are the ones intended to do the pushing, although a player may use his body (but not his elbows).