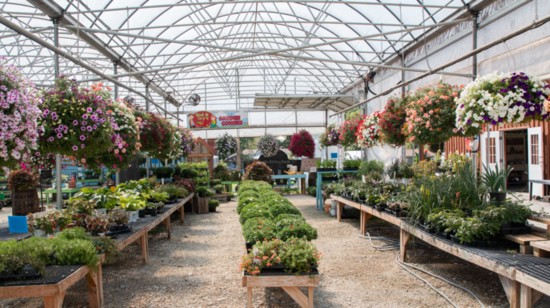 While the past 20 years have seen Blooms & Berries Farm Market serving up a healthy slice of autumn amusement with their Fall on the Farm festival (think corn maze, hayrides, caramel apples and, of course, pumpkins galore), this family business is so much more than that.

One of the first things you’ll notice when talking with co-owner Jeff Probst is the excitement he has for his business. It’s palpable. Even though he didn’t move to the farm until he was 12, Jeff says he had spent enough time outdoors and learning about farming from his father that when his family took over the 61 acres of land (purchased by his great grandparents in 1939), it seemed like a natural progression.

“My dad and his sister and brother put themselves through college working on the farm, but it didn’t look like anything we’re doing today,” Jeff says. “In 1999, my parents were looking for me to get some experience and understand different pieces of the business, as well as find a way to pay for college. So we moved back onto the property and planted an acre of strawberries. We opened shortly afterward with strawberries, pumpkins and a few plants—and we’ve grown ever since.”

Jeff also paid for college by working on the farm. After graduation in 2007, he took a sales job. Six weeks later, he quit and came home to Blooms & Berries.

“I thought, if I’m going to do it, then now’s the time, so I came back to run it with my mom. In 2015, we put up the Market Barn, and we keep taking on new projects and growing a little bit every year,” Jeff says.

That incremental growth has led to an outcropping of near year-round activities for the farm, including the popular Fall on the Farm and you-pick berries days (and other assorted vegetables like green beans, sugar snap peas and potatoes), plus their two local roadside stands and seasonal garden center.

“We’re just trying to make it easy for families that don’t have the time or space to garden to come out here and have a true agricultural experience, get their kids’ hands dirty and learn where their food comes from,” Jeff says.

Up next? A beer garden will soon be brewing up a lot of excitement as the latest addition to Fall on the Farm. Open on weekends and for special events through the end of October, the garden will focus on a variety of craft beer, with some local brews mixed in. Of-age visitors can grab a beverage and walk with their families and friends through the corn maze and other fall features.

“I think [what customers love] is there’s always something new," Jeff says. “They’re always going to have a moment of discovery when they show up. ... there’s a little something they didn’t know about or didn’t see before—we take pride in those things.”