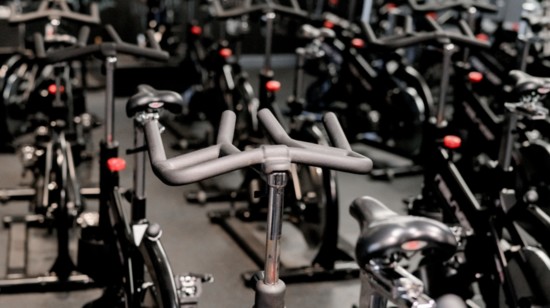 “We wanted to create a community … we wanted our riders to know each other, to keep coming back because of the friends they made here. We were vested in that from the beginning.”

Without question, they’ve succeeded. Meet Casey Hilmer and her mom, Meg—co-owners of Power Ryde, the area’s only cycling studio featuring non-stationary bikes. Over the past five years, they’ve created something extraordinary—a total-body workout taken to the next pulse-pounding level; a cross-training staple for local sports teams; a family business powerfully focused on giving back; and most important, a like-minded tribe of riders and exercise enthusiasts who support, encourage and inspire each other.

Taken together, it forms a life-changing experience—for Casey as both an instructor and businesswoman, and for every client who walks through their door.

“Most people refer to us as their Power Ryde family,” Casey says. “Everyone who comes here, we know their names, their stories, their goals.”

Casey's journey began at the University of Michigan—a competitive runner with a hip injury who needed a high-cardio alternative that would keep her off her feet. Normal spinning was boring until she found a studio with Real Ryder bikes. It was love at first ride.

“Cycling, in general, is so beneficial for runners. But these bikes take it up a notch. You can go left, go right … they move 20 degrees both directions. There’s so much more you can do on them,” Casey says. “You’re basically strengthening your whole body.”

“Most gym exercises are only forward and backward … stair climbers, ellipticals, treadmills,” Meg adds. “Because the bike moves, it works your core, but is easier on your hips, knees and ankles. It works your lateral side body too, and overall, you burn 20–30 percent more calories.”

It was fall 2012 when both mother and daughter found themselves at a crossroads—Meg recently retired and searching for what to do next; Casey a college grad hoping for medical school but also unsure of the road ahead.

“Then my dad said, ‘Why don’t you and your mom open your own studio with those bikes you found in Ann Arbor?’” Casey recalls. “The next day, we started writing a business plan. We opened the following April.”

As the studio has grown, so has their focus. Power Ryde is now home to 30 bikes, off-the-bike strength classes, team-specific training and healthy eating programs throughout the year. But from the start, Casey and Meg knew they wanted to create more than just a workout experience.

“I wanted to offer a community class so we could donate the money to Children’s,” Casey says. “I survived an attack when I was very young, so giving back was important to me, for everything the hospital had done.”

Throughout that first year, they hosted a weekly charity ride. In year two, they upped the ante—increasing the donation minimum and opening the opportunity to their clients’ causes. Now it’s a staple of their studio community.

“Officially, we’ve raised $68,000 to date,” Meg says. “But it’s more than that. It’s about awareness, bringing attention to charities no one knows about, close to home and heart. Toy drives, food drives, people who later volunteer for a cause or donate directly … none of that gets tallied. But it’s a big part of what we do.”

“I try to inspire people, make them feel like they can do anything when they leave,” Casey beams. “When people say, ‘Your words really touched me, really helped me,’ I feel like I’m doing more than just teaching a fitness class … I’m making people stronger.”