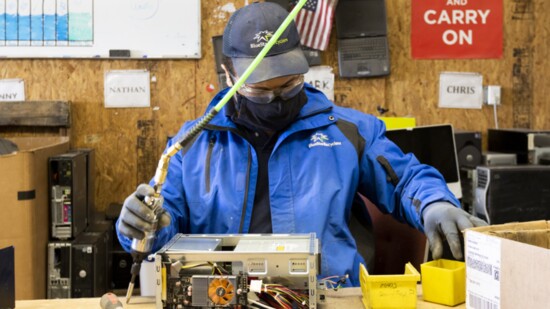 Tucked into a quiet, tree-lined court near I-25 and Fillmore sits an unassuming 8,000-square-foot warehouse. But don’t be fooled. Magic is happening behind those walls.

Sure, Blue Star Recyclers ethically recycles computers and other electronics, keeping millions of pounds of eWaste out of landfills. But there’s a second story here. Roughly 90 percent of Blue Star Recyclers’ workers have autism or other disabilities. And that is by design. This well-tested decision saves taxpayers money, employs people who wantto work and creates a better workforce.

Thirteen years ago, Blue Star co-founder Bill Morris managed a government-funded day program for people with disabilities. Attendees dissembled electronics to stay busy. They didn’t have any goals or training. They simply figured it out and they were great at it.

Bill wondered… Could he could create meaningful employment for these folks and others like them? He leapt, launching Blue Star in Colorado Springs.

“We found out really, really quickly that the promise they showed was nothing compared with what it’s become,” said CEO Sam Morris, Bill’s son.

These employees not only are able to do their jobs; in many ways, they are better at it than neurotypical workers. Turnover in the industry is a crushing 200 to 300 percent. For the vast majority of people, doing the same job all day every day is, well, boring. That frequently contributes to a high turnover rate and low time-on-task.

Blue Star’s turnover? Closer to 2 percent. And they have virtually no absenteeism or time offsite due to accidents. That’s because many workers with autism thrive on repetition. A few years ago, Blue Star commissioned a task-engagement survey for its employees. It came back at an astounding 98 percent time on task.

These special workers carry out a special mission: They ethically recycle nearly anything that plugs into a wall.

Blue Star is a certified e-Stewards recycler, meeting the highest standards in the industry. They refurbish and dismantle electronics, donate some refurbished laptops to school districts or low-income families, sell re-usable parts, then send what is left over to other e-Stewards recyclers in the United States to break down further.

This award-winning nonprofit has contributed roughly $12 million in new revenue for Colorado. It has been self-sustaining since 2019. And it boasts a $20 million social return on investment, largely in the form of providing jobs for people who otherwise wouldn’t be working.

In other words, Blue Star is saving taxpayers about $48,000 annually per Blue Star employee.

The other primary challenge? Workers who receive benefits through the federal Social Security Disability Insurance program typically are limited to 20-24 hours’ work per week. That gives employees who want to work full-time no mechanism to try it without losing disability benefits.

Looking to the Future

A decade ago, fewer companies saw the benefit to hiring workers with autism. That’s changing and companies like Blue Star are leading the way. They now have five locations and have partnered with school districts, including District 11 in Colorado Springs. They’re also working with recycling companies in the United States and abroad to teach them how to successfully train and employ people with disabilities.

“More and more people are finding out that this is a superior workforce,” Sam said.

In upcoming years, he expects major players from outside the recycling industry to begin hiring from this untapped pool.