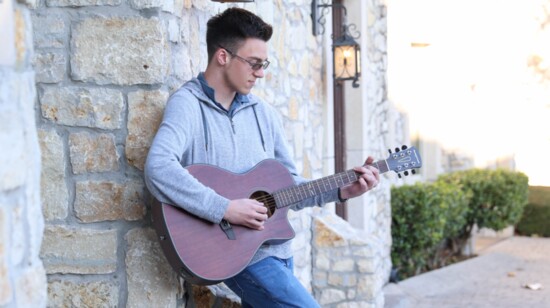 Another Shining Star of the Guitars Sanctuary's Performance Academy

This somewhat atypical 18-year-old high school student, Briggs Christopher, loves playing Minecraft with his friends but has also dedicated a number of years to learning music at The Guitar Sanctuary's Performance Academy. Shane Frame, the Academy's Director says about Briggs,"______ ".

It might have been Briggs' uncle, who played in a band, who inspired him to become so interested in music. But regardless, his commitment to his craft seems determined and absolute. He says neither of his parents, Robert and Kristen, are very musically inclined but it seems his love for the guitar started early and music has become a focus in his life. Being a senior at Cornerstone Christian Academy, he plans to attend college at the University of North Texas. His major there? You guessed it, "something music-related!"

Briggs plays both the piano and guitar and sings as well. The obviously talented young man has also written three songs of his own and when asked what he wanted to do eventually with his music career, his reply was quite simple; "I want to be a performer." He says he typically prefers pop music, which should bode well for his future as that is such a popular genre.

Having grown up in McKinney he has certainly seen it grow as well. He has an older sister, Emma, and brother, Cole, and two Great Perrine dogs, who amazingly, despite their size and strength, get along fine with his sister's two pets, a bunny and a bird. One can only imagine what chaos that could have become!

McKinney has produced a number of outstanding artists from the area, some of whom have gone onto shows such as American Idol or The Voice. It would not be a surprise to see this talented young man achieve great things as well. Good luck, Briggs!