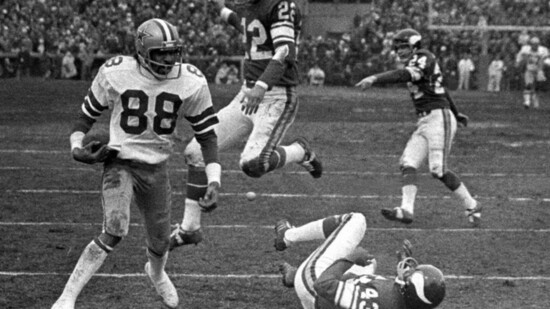 Wait Of A Lifetime

After a 38-year wait, Dallas Cowboys legend Drew Pearson was elected into the Pro Football Hall of Fame as a member of the Class of 2021.

"I've always wanted this. I promise I will live up to what the Hall of Fame is all about. It's giving me a chance at immortality. The legacy of that is amazing," says the 70-year-old Plano resident, who was the only first-team/all-decade position player from the 1970s not in the Hall of Fame.

The three-time Pro Bowler and First-Team All-Pro wide receiver will be enshrined Aug. 8, with Cowboys Hall of Famer and Drew's former quarterback Roger Staubach being his presenter. Hall of Fame representatives rescheduled the 2020 Class ceremony for Aug. 7 in Canton, Ohio, followed by the 2021 Class enshrinement.

Being selected as the solo senior candidate for the Class of 2021, 'the original No. 88 jersey wearer' says he's just excited that it occurred. "To me, it didn't matter when it happened – yeah, I was disappointed a few times and wondered why. But I know it's a tough process. I survived that process, and I'm a Pro Football Hall of Famer. That's all that matters."

After being an undrafted free agent coming from the University of Tulsa Golden Hurricane football program, Drew became one of the NFL's greatest wide receivers, earning career records of 489 receptions and 7,822 receiving yards, along with 189 rushing yards, 155 yards returning kickoffs, and 50 touchdowns (48 receiving and two fumble recoveries). He played for the Cowboys from 1973 through 1983.

Drew, a Cowboys Ring of Honor member, is the 20th person selected to the Hall of Fame based on their accomplishments with the Cowboys. Former head coach Jimmy Johnson and safety Cliff Harris were elected to the 2020 Hall of Fame "Centennial Class," but the enshrinement ceremony was postponed due to the COVID-19 pandemic.

Since his retirement from football in 1984, Drew worked extensively as a sports broadcaster for such networks as CBS and HBO. In 1984, he also was named to the Dallas Cowboys' 25th anniversary team. He authored the 2004 book Hail Mary: The Drew Pearson Story.

Frisco Life first caught up with Drew as he was hosting Drew Pearson Live every NFL Sunday morning on Channel 8 ABC WFAA-TV as the only local Dallas Cowboy-focused pre-game show, and the resulting cover story about Drew's enterprises was published January 2020.

This year's Enshrinement Week was dubbed "Twice the Fun in '21." Last year's postponed Hall of Fame Game between the Cowboys and Steelers is slated for Aug. 5. There's no doubt who Drew will be cheering on!

To hear directly from Drew during and after his Hall of Fame experience, tune into:  "Drew Pearson Podcast - The Ultimate Hail Mary" produced by Phazzanation Studios.

Officially licensed apparel associated with "Mr. Clutch 88" and other retired Dallas football greats can be secured online at CowboysLegends.com.