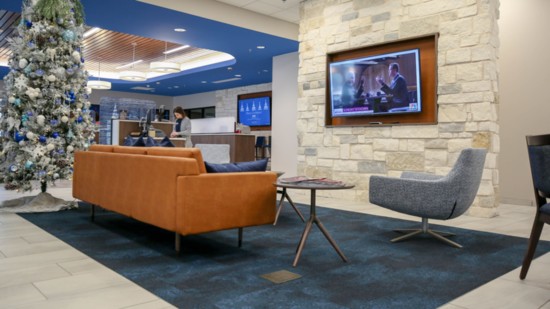 You Could Say Banks Are a Dime a Dozen

A rare gem, Farmers Bank & Trust was chartered in 1906 in Magnolia, Arkansas. The majority of the bank ownership still resides in Magnolia and are descendants of the original founders. In fact, in January 2017, the fifth generation of a founding family assumed the role of President & Chief Executive Officer.

Why does this make the bank special? As Prosper’s Mayor, Ray Smith states, “Being mainly family-owned brings a special attitude towards customer service.” Ray is the Market President of the Prosper branch, which was initially opened in 2016 in part of a strip mall which the Mayor said made most people think it was an office for Farmers Insurance. No more, on December 5th a beautiful stand-alone facility had its ribbon cutting ceremony with the Prosper Chamber of Commerce (see this month’s GOOD TIMES section).

In its 113th anniversary, its footprint has expanded into Texas with the Prosper office being the first in the DFW area while adding to the total of twenty-three banking offices and one loan production office. Not surprisingly, Prosper’s branch has already become a star within the bank’s holdings.

Their Mission Statement is very simple, “Friends and neighbors helping each other find financial solutions for a lifetime”. So is the Chairman’s, Bob L. Burns, message, “We want to welcome you to Farmers Bank and Trust - a community bank that has given our customers the highest priority for over a century. We believe that success is simply a matter of treating our customers the way we would want to be treated.”

It seems this family-owned  attitude towards customer service has served the bank well. The oldest existing general ledgers indicate the bank began with approximately $75,000 in assets. Today, the bank has assets that exceed $1.5 billion and offers a wide variety of products and services to serve the needs of the communities it serves.

The beautiful new facility reflects that attitude, offering free coffee from Starbucks with the beans ground on-site. The interior fits its location here in Texas and the Dallas area with the Mayor’s office showing great support from the Dallas Cowboys.

The Prosper branch is a full-service branch that claims to “be as unique as our customers while specializing in flexibility.” A large portion of the Prosper’s branch is in commercial construction lending, which is no surprise given the growing nature of Prosper and the other close and growing communities.

To learn more about why you should consider banking with this local, family-owned bank, visit myfarmers.bank, or simply drop in and enjoy a coffee.