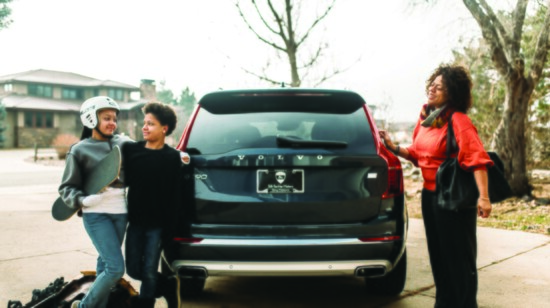 The hybrid boom has filled the quaint streets of Boulder with electric cars zipping noiselessly from A-Basin to Pearl Street. Current electric options, however, are limiting in size, terrain, and range. Their charge weakens in cold weather, seat capacity is cramped, and good luck gassing up Vail Pass with enough mileage to spare. These roadblocks make it difficult for electric to keep up with an adventurous and busy 303 family.

This semi-electric beauty-on-wheels quickly won Hybrid Seven-Seater of the Year and was named the Large SUV of the Year in the News UK Motor Awards.

The Volvo XC90 Recharge has both electric charging power and a traditional engine. With 18 miles of pure electric range, this plug-in Volvo kicks on its combustion engine once you reach speeds that burn up electric power. Then, entering slower zones the cylinders cut off, and the Volvo cruises in electric, saving you fuel and the noisy rumble.

The dual nature of the Volvo XC90 raises fuel economy since neither engine or electric alone do all the heavy lifting.

It’s the best of both worlds. Electric energy-saving with a cabin size to fit the whole family (while storing skis, skateboards, groceries, and pups), and engine pick-up power to stave off charging anxiety on long trips or cold weather.

“More than anything, it has more space than most electric hybrid options out there,” says PT Ertl of Sill-TerHar Motors, a local dealership specializing in Volvo, Ford, Lincoln, Mazda, and Maserati. “It’s really great for the mountains because you have enough room, plus Volvo’s safety and all-wheel drive system are amazing.”

Still-TerHar gets it. Because they get Boulderites. As a locally owned dealership, car experts like Ertl have a commitment to the community. They walk through the streets, share the roads and chairlifts with us. Which is one reason they are electrified by the Volvo XC90 Recharge.

“We’re getting a lot of requests on hybrid and electric cars, but a lot of people don’t know Volvo has a robust offering,” Ertl says. “It’s quite a different feel from Tesla. More peaceful, nature-centric, with all the feel and mentality of Scandinavian style.”