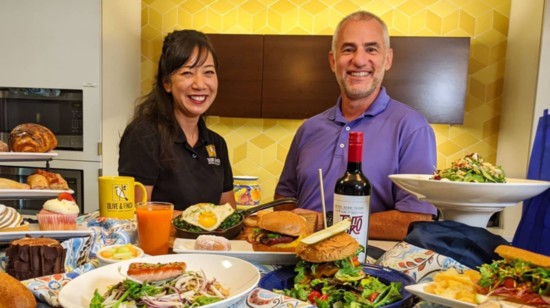 Denver foodie commits to promoting restaurants when they need it most

Larry Herz makes sipping cocktails at 9 a.m. seem professional. It’s a weekday morning, which means that Local Biz Buzz is live and on the air. It’s a show that features a different local business everyday, produced by Our Community Now (OCN) and hosted by Larry himself.

On this particular day, Katie Burns from Slalom Fox stands in the brightly lit, staged kitchen. She pours her signature canned cocktails into four separate glasses, promising that this episode of Local Biz Buzz will take on a more literal meaning. The new entrepreneur is slightly nervous for her first recorded debut as a business owner.

“There’s no camera, it’s just you and me,” Larry assures Katie in his thick New York accent while excitedly glancing at the libations. As someone who never foresaw himself on camera, he’s had to adapt as well.

Larry’s love for the restaurant biz started early. As the youngest child, Larry’s parents were tired of cooking by the time he came along. The family frequented the Long Island restaurant scene and, over plates of food, encouraged the young Larry to work for himself one day. That day came around quickly, and by the time he was in middle school Larry was toting duffel bags full of Twix and Bazooka Bubblegum on the bus to sell to his peers.

Out of college, Larry managed multiple restaurants in the New York area. One evening, he was held up at gunpoint during closing time. The incident initiated his move to Colorado. He drove cross-country in his jeep without a job or place to live. Shortly after, he opened his first restaurant, an Italian eatery called Carmines on Penn, at age 27.

Owning several restaurants familiarized Larry with the struggles entrepreneurs like Katie face. Those struggles are largely why he braved a career change at age 51. Working really hard and making very little wasn’t worth the expense of missing valuable time with his two daughters.

Now, Larry calls himself a restaurant promoter. It’s a title he chose to separate himself from food critics.

“I am here to help. I don’t think people really believe it or understand what it means until it happens.”

In the midst of the Coronavirus pandemic, restaurants need more help than ever. According to the Colorado Restaurant Association’s June report, 56 percent of Colorado restaurants are considering closing permanently under the current conditions. Over 75 percent of restaurants are operating below half of their normal capacity.

Larry and the team at Our Community Now are doing everything they can to ensure that number doesn’t worsen. They help restaurants get exposure through news content and social media. They have the largest social media reach in Colorado with over 800,000 followers on Facebook alone.

Before the pandemic, Larry testifies that many restaurants didn’t see the value in social media. He noticed a panicked influx in Instagram accounts from local businesses.

“Brands that were against social media became quickly desperate to get the word out that the were open or that their hours had changed,” Larry says. “The pandemic really made them aware of their deficiencies and led them to people like me who have followings.”

Don’t let him fool you— Larry wasn’t always social media savvy. He started his job at OCN without a laptop. However, he recognized the importance of riding the social media learning curve and eventually became so well-versed in the online culture that he started the DINE Influencer Group.

This growing community of influencers meet together at their favorite local spots and brainstorm the best ways to promote quality businesses in their area. When brands come into OCN and need some extra assistance, Larry gives them access to the DINE list of influencers. In exchange for a sample of their product, influencers will promote the brands on social media and, effectually, help build their base of followers.

In addition to helping business owners, Larry helps consumers navigate one of our culture’s most plaguing dilemmas— where to go out to eat. After all, how many times have you typed the words “restaurants near me” into the Google search bar?

Larry created the youtube series “Restaurants Near Me” partially in an effort to help the public navigate this issue. On each episode, he visits 5 restaurants in 5 hours, yet viewers experience the whole ordeal (while salivating) in about 5 minutes. To preserve his stomach’s capacity, he only takes one or two bites of each dish. Other than food cost, the promotion is completely free for the restaurants.

Helping is the heart of OCN. Joe Oltmann, the CEO and finalist for Ernst & Young’s Entrepreneur of the Year award, started the company eight years ago while sitting at a bar in Parker. Frustrated with how big name hardware stores were taking out smaller stores like Ace Hardware, Joe scrawled out a solution— Our Community Now— on a cocktail napkin. Fast-forward to the advent of the Coronavirus. Joe utilized his company's platform and offered free promotion services to any restaurant for three months.

“The good thing is that we’re known for how we support the community,” Joe says. “We make the little guys seem big,” Larry affirms.

Local Biz Buzz, as well as Larry’s other weekday show “What’s for Lunch” can be viewed on the OCN Eats Facebook page: https://www.facebook.com/ocneatsdenver. 'Restaurants Near Me', along with other content, can be found on their website: https://www.ocneats.com/.