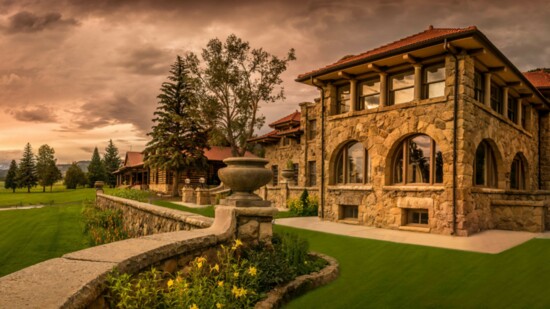 The only living things we’ve seen in the past 45 minutes are a herd of grazing elk and an out-of-place FedEx driver zipping past in the opposite direction. We’ve just pulled up to the historic stone mansions, cottages, and central hunting lodge at Vermejo Reserve Park, an ecological-minded luxury guest ranch in northern New Mexico, owned by media mogul, conservationist, and philanthropist Ted Turner. And we’ve just found a mountain oasis.

We’re here for a long weekend to soak in the great outdoors with such excursions as fishing, hiking, archery, and shooting. And there’s a lot to explore. At 920 square miles, Vermejo is the largest privately owned tract of land in the United States.

But Vermejo’s superpower is the spirit of conservation and innovation driven by the owner himself, Ted Turner, which has trickled down to every staff person you meet.

Marketing manager Deann McBride joins us on a hike to Vermejo’s own Castle Rock, a sandstone formation surrounded by high-mountain grassland. Native Americans once roamed here. Billy the Kid and Louis L’Amour did too.

“Two things I love about Vermejo,” Deann says. “One is we’ve got our own private national park on 550,000 pristine acres to get out and explore. And then there’s Ted’s vision to get this all back to before the West was one to save everything. It’s a continual process.”

Vermejo is a paradise for hunters and fly fishers, artists, and photographers trying to escape the concrete jungle's confines and see a living, breathing Western landscape being carefully curated.

Herds of elk, deer, and feral horses roam the vast property. One of several success stories of Vermejo is the reintroduction of the Rio Grande cutthroat trout. Of course, the main attraction here is the renowned Castle Rock bison, a genetically pure herd with roots to the famous Yellowstone herd.

It’s been a busy day. We sit down to dinner in the main lodge, a sprawling log-hewn building that houses the dining facilities and operations hub. Not too long ago, we’re told, before Ted Turner bought the property in 1996, ranch cowboys used to throw down pallets in front of the stone fireplace after a day’s labor. This evening’s dinner guests chat in buzzy excitement about their afternoon hunting ventures and what promises to be a hearty chef-prepared meal.

The group seated next to us recounts their unforgettable excursion to harvest a bison. Down with one shot to the heart. The group was invited to participate in a culling of some of the aging bison— a way to strengthen the herd genetics.

The dinner guests’ whopper story is the essence of why so many travelers make their way to Vermejo to take part in the incredible conservation work being done by Ted Turner’s staff of wildlife managers and scientists who are rebuilding the wild spaces and wildlife of the great American West.

We’re staying next door at the ranch’s original residence called Casa Grande, built-in 1909 by Chicago grain magnate William Bartlett. He moved his entire family West with the hopes of alleviating his son’s tuberculosis. He ended up building a family compound that included opulent homes for his children, the hunting lodge, and other guest cottages.

Casa Grande, with its marble columned hallways and grand living spaces, is a 25,000-square-foot stone mansion whose seven renovated rooms can be booked individually or as a full buyout for larger parties.

After dinner, we wander Casa Grande, with its marble-columned hallways and grand living spaces that include a conservatory, sunroom, and sumptuous dining room with the original owner’s China on display. Complete renovations of Case Grande were finished in 2012, and each room was painstakingly appointed in antiques and other fashions to reflect its turn-of-the-20th-century aesthetic.

We lounge on the living room’s deep blue velvet sofas, browsing a few of the hundreds of books lining the shelves around us, soaking in the history of not just this historical ranching property but Ted Turner’s own storied life. A rare Steinway grande itches to be played.

And from the second-story balcony overlooking the room, of course, a mounted bison head holds court.

Vermejo is a paradise for hunters and fly fishers, artists, and photographers trying to escape the concrete jungle’s confines and see a living, breathing Western landscape being carefully curated.