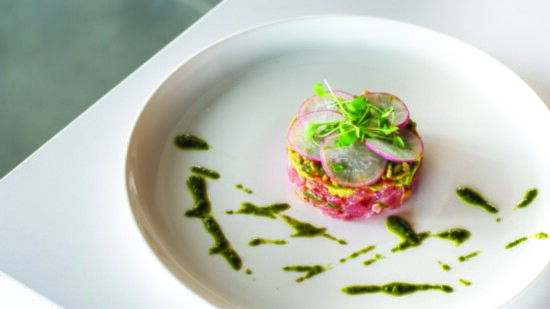 How two Senegalese-French sisters built a culinary hotspot in the heart of Denver.

Le French Bakery and Cafe is Denver’s own little slice of Paris.

Located in the Belleview station area, the restaurant is informed by its world-traveling Senagalese-French owners who have created a casual-chic dining outpost. The restaurant offers authentic French cuisine with global influences while specializing in high-end pastries that dazzle upon entry and making it the perfect way to spend a Sunday in the city.

Menu and ambiance aside, we argue that the most interesting thing about the place is none other than the women behind it. Chef Aminata Dia alongside her sister Chef Rougui Dia spent their earliest years in Senegal, a coastal country in West Africa, where they lived on a farm alongside the Senegal River, cooking the common foods of the region, including corn, sweet potatoes and fresh fish.

They soon relocated to France to the 17th Arrondissement of Paris near the Sacré-Cœur when Aminata was just 2 years old, but their parents remained steeped in their Senagalese roots.

“My mother learned to make a lot of dishes from various backgrounds, learning from the neighbours,” says Aminata. “In addition to traditional French and Senegalese dishes, she made things like Moroccan couscous, among others.”

Aminata remembers her first experience with French food as a young girl, where she indulged in decadent pastries, including a favorite choice of Normandie apple pear tartes. You could say she was a bit of a foodie from the start. Aminata eventually settled in the United States with her family in 2000, first landing in San Francisco (a culinary mecca in its own right), before settling in Denver. She would earn her degree from the Culinary Art Institute and then began her own catering business, AmiCuisine, which she ran for eight years.

Meanwhile, Rougui (who has been called the “African Queen of Parisian Cuisine”) rose to prominence after being named the executive chef at the restaurant Petrossian in Paris. She was the first ever Black female in the world to hold this position at a Michelin star restaurant.

“My sister and I lived most of our professional experience apart,” shares Aminata. “She was a well-known, very successful chef in France while I was building my career in Colorado.”

The idea to collaborate struck during a culinary tour in Brazil where they worked closely together for two weeks and realized how compatible they were as partners in the kitchen. The Dia sisters would debut Le French Bakery & Cafe (LeFrenchDenver.com) in the spring of 2019 on Newport St. in the Denver Tech Center.

“It's been amazing bringing our two experiences together at the service of the Denver metro area,” says Aminata. “Denver has a very rich, diverse and very vibrant food scene, and our community has been extremely welcoming and supportive.”

Their menu hosts an array of diverse dishes made using traditional French techniques but with a twist from the sisters global styles. This includes a slow-cooked lamb shoulder in red wine with an infusion of North African spices, and paired with potato puree and pickled lentils. For vegans, their gniiri dish is a must-try. Adapted from their grandmother’s famous Senegalese meal, it is a flavorful layering of roasted cremini mushrooms, fried shallots, roasted carrots, basil, cherry tomatoes and pine nuts atop a velvety base of creamed cornmeal, peanuts and black-eyed peas, Aminata describes. Top that off with a decadent truffle oil and you have a standout dish worth an applause.

Between their unexpected use of flavors in their savory recipes and the melt-in-your-mouth pastries and breads, Le French has secured themselves a seat at the table among Denver’s growing food scene. And although Covid has hit the restaurant industry especially hard, the Dia sisters remain optimistic and look forward to getting back to creating new dishes and delighting their guests in-person again.