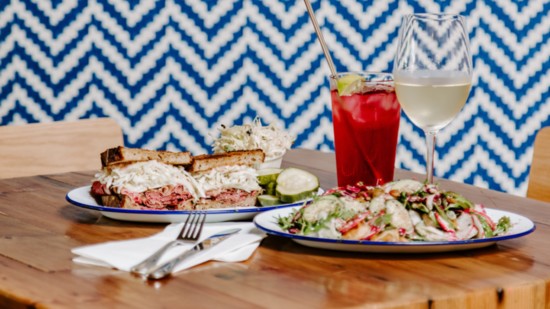 Grabbing A Bite and Beverage at Leven Deli

While seated at a table in his deli, Anthony Lygizos is laughing and making jokes and sharing stories as if we’re old friends. My water glass is constantly full, his hospitable nature on full display.

As owner of Leven Deli Co., along with his pastrami-perfecting partner, Luke Hendricks, hospitality is what Lygizos hangs his hat on. Customers shuffle in out of the half-Jewish, half-Mediterranean deli, dining in and chatting over house-made bread and fresh salads, with some pausing to wave and greet Lygizos.

“I come from a long line of medical professionals,” says Lygizos. “So I went to school for hospitality. And I loved it.”

After graduating from the University of Denver, Lygizos worked his way into the field by way of The Little Nell in Aspen. He became a sommelier and learned from a mentor-turned-friend at the Denver restaurant, Potager.

But after falling in love, Lygizos was no longer interested in the late nights and finicky schedules of the bar world.

“It wasn’t until I fell in love with an amazing woman that my world changed.”

Lygizos had his sights set on opening a restaurant that would not only cater to daytime hours, but satisfy his craving for the sandwiches he used to get as a kid on road trips to Ann Arbor, Michigan.

“It was the most popular concept in the late 1800s, early 1900s. Finding the balance between an old-school deli and new-world flair to meet the needs of Denver was today’s challenge.”

Leven brings the nostalgia of an East Coast deli counter to downtown Denver, with lighter and brighter food offerings. Olive oil is substituted for butter, dolmas and chickpeas reign supreme, and Mediterranean spices are put to great use across the menu.

The word “Leven” means light. It also means to improve. Lygizos’ mission with his deli is to lighten the lives of his customers, his employees, his family, and friends. But he’s also here to help improve the restaurant and hospitality industries, both of which are vital to the city.

“Leven stands for three things. First, we’ll never be open late. Everyone can be in bed by 10:30 p.m. if they want to be. Secondly, we pay $20 an hour. We work a little harder, but smarter. And lastly, we offer a pathway to partnership. There’s room to grow, to own. That’s what we value.”

Now more than a year into its existence, Lygizos has had time to reflect on what he’d like to do with his business moving forward as well as what he’d do differently if he could go back in time.

“Don’t have a logo that people can’t read,” Lygizos says, pointing at the writing on his hat. “But we’ve learned that Denver is craving fresh, different flavors. Which is what we hope Leven brings to the table.”

Folks with a sweet tooth, take notice: there are even plans for a frozen Greek yogurt soft-serve machine.

Make sure to swing by Leven and grab an Eighteen (smoked turkey breast, Jarlsberg slaw, Russian dressing on toasted rye) or try a sample of the potato salad at the counter. Ask a staffer which wine or cocktail they are excited about. Enjoy the skylight and hanging plants and lively colors throughout the interior.

Your new favorite deli is just behind the art museum.