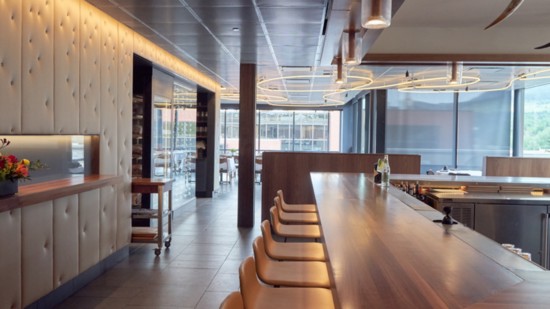 Chef Amos Watts has a meaty reputation — both figuratively and literally. Before coming on as chef/partner of Corrida, Watts helmed the kitchen at Old Major, one of Denver’s top fine dining restaurants, a spot that’s probably best-known as being a meat Mecca, a regular shrine to swine.

So you’d be forgiven for making a beeline straight to Corrida’s meaty menu options. (And we don’t think you’d be disappointed in any of the dry-aged rib eyes, the incredible 7x wagyu bavette or the garlic saffron chicken.) But at Corrida, Watts really shines with the proteins that swim, and with — of all things — the vegetables.

Don’t miss the Atun Crudo, with its chunks of rosy tuna and pickled ramp cubes in a tangy salmorejo (a thick, creamy soup made with tomatoes and bread). Or the larger, perfectly-tender Pulpo Gallego, octopus topped with dollops of paprika aioli, resting on finger-licking-good salsa verde. The octopus tastes like the love child of a chicken and a lobster — it’s firm, rich and slightly sweet. Light-years away from the chewy versions you may have (reluctantly) eaten before.

There’s also the piquillo peppers with fried garlic, and the coal-roasted beets with goat cheese and pistachio crumble, and the butter-braised morels with pickled onions, and the asparagus with almond Romesco sauce. You get the picture — at Corrida you’ll definitely want to eat your veggies.

Beyond Chef Watts and his soulful food, there’s a lot more to Corrida. Bryan Dayton, for one, who’s got a reputation of his own. His is just a little boozier.

Dayton first made a major mark on the Boulder restaurant scene as beverage director for Frasca Food & Wine, but that was just the beginning. He oversees the drinks and co-owns OAK at fourteenth and Denver’s Acorn (Watts was Acorn’s opening chef); both restaurants are considered among the best in the state.

So, of course, Corrida’s drinks, all Spanish-centric, are fantastic. There are lots and lots of sherry options, an all-Spanish wine list, and a fun, roaming gin tonica cart. (Radishes, espresso beans and serrano peppers are choose-your-own-adventure-style cart options.)

The indoor dining room is elegant yet comfortable, but the real showstopper is the rooftop patio with killer views of the Flatirons. It’s already the most-buzzed-about patio in town thanks to Mother Nature’s décor, and it’s possible that — even considering Watts’s and Dayton’s impressive pedigrees — the restaurant space itself has garnered the biggest reputation of all.