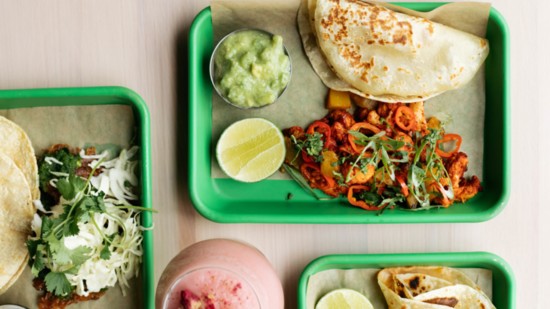 New To The Neighborhood

Mister Oso makes sense. Sure, one would hope that any restaurant makes sense, but this one — from the name, to the concept, to the location — really makes sense.

First there’s that moniker. Mister Oso is the little sister restaurant to LoHi’s popular Señor Bear. See what they did there with the name? Makes sense!

Then there’s the concept. Señor Bear is a pan-Latin kitchen, which covers a lot of ground. Mister Oso has a tighter menu, with a strong focus on smoked elements, whether meats or veggies, loaded into easy-to-eat tacos, salads, and ceviches. That’s it. Simple, unfussy, and fairly familiar.

“They’re similar in the sense of the flavor profiles and the vibe,” says chef and co-owner Blake Edmunds. “They’re the same ingredients, just interpreted differently. There’s so much random fun stuff there (Señor Bear). The focus here (Mister Oso) is on smoked meat tacos and ceviche. All the tacos and platters get some element of smoke to them.”

The smokers that have taken up residency out back are central to the restaurant, hosting a constantly rotating lineup of characters that include everything from chickens to fingerling potatoes to an achiote chile garlic marinade.

Edmunds’s favorite dishes involve all three. He hopes that Mister Oso becomes known for the cauliflower al pastor tacos, which swap cauliflower for the more traditional pork. While the ‘flower isn’t smoked, the achiote chile garlic marinade is, which is then pureed, rubbed all over the cauliflower, and then roasted before being inserted into tortillas.

He’s also very excited about a couple of chicken dishes: the snacky pollo anticucho and more substantial el pollo bronco. The anticucho is a play on a Peruvian street food traditionally made with beef heart. Mister Oso instead uses chicken sausage, and also confits and smokes fingerling potatoes for it. El pollo bronco was on Señor Bear’s opening menu; Edmunds resuscitated the smoked half-chicken and serves it with taco accoutrements and fresh corn or duck fat flour tortillas.

The drinks make sense, too. With so many excellent Latin cocktails, there’s really no reason to tap into anything else. All the greatest hits are there — the margarita, mojito, paloma, pisco sour, caipirinha, and daiquiri. There’s also some very cool mocktail to cocktail drinks, so you can choose how boozy you want to get.

“There are really fun options that are almost agua frescas that you can add alcohol to if you want,” Edmunds says.

Perhaps what makes the most sense of all is Mister Oso’s RiNo location. The restaurant took over the Populist’s spot on Larimer Street, a locale that’s young, vibrant, buzzy and growing - four words equally apt to describe Mister Oso.

“We want to grow this brand,” Edmunds says of the potential for more Osos. “The idea is to have more. We’ll stir the pot to see if it works or not. If it catches, we’ll refine it more, narrow the vision and do a few more of these if we can. I just really love this food.”