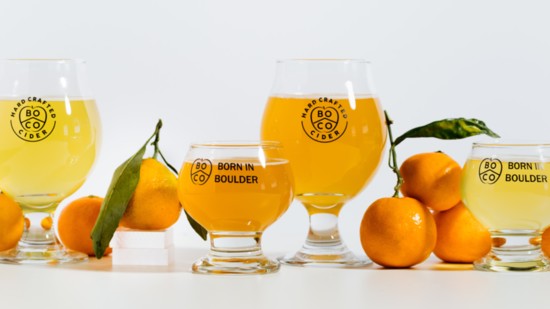 Surely The Apple Is The Noblest of Fruits

BOCO Cider, Made the Boulder Way

Don’t call it a comeback; cider’s been here for years.

You’d be forgiven if you considered cider somewhat of a trend on the alcoholic beverage front. After all, Boulder only got its first cidery, BOCO Cider, in 2018. The thing is, though, hard cider is one of America’s oldest libations, dating back to the original colonies.

“What’s old is new again,” says BOCO Cider owner Michael Belochi. “I always felt close to that idea that it’s cool to bring something back.”

And cider is most definitely back. Boutique cideries, like BOCO, are seeing the most growth, collecting a new generation of fans with its sparkling, tart, naturally gluten-free goodness. BOCO does this better than most, taking the craft of making cider — equal parts art and science — and bringing it up to the high level its surroundings inspire. They call it made the Boulder Way.

The Boulder Way means every sip is all-natural with no added sulfites, completely unfiltered, never pasteurized, and always made from top ingredients (locally sourced when possible). Belochi also doesn’t use fining agents — the additives that pull out sediment to make the beverage clear, but also strip out the flavor — and he naturally carbonates his ciders with yeast that create tiny, creamy, Guinness-like bubbles.

“We’re always playing with flavors,” Belochi says. “We’re not traditionalists. It’s more about innovation and imagination. We’re playing with all these different things; we just look around.”

Like at Belochi’s son’s soccer practice in Boulder, he looked around and noticed some pretty exuberant crabapple trees. So he went out and picked some and, along with master cidermaker/microbiologist Joshua Smith, got to work on a Valmont Sour, a tart cider with a note of apricot. And when he looked around last summer and noticed his garden had produced a bumper crop of poblano, Anaheim and jalapeño peppers, he thought, hey, let’s balance out the spicy with some sweet mangos. Thus, the super-popular Mango Tango cider was born.

“You’ve got to make it interesting. How can you not have playful flavors like that? There aren’t any rules in the minds of the American public because it’s (cider) kind of new to them again,” Belochi says.

Other original flavors conjured up by BOCO Cider include Mumpkin from roasted Munson Farms pie pumpkins, Kombucha Infused from Boulder-made kombucha and Ginger made with — you guessed it! — ginger.

The place to taste test all of these ciders (and there are more traditional flavors, too) is at BOCO’s North Boulder taproom. That’s where you’ll get to sip the handcrafted cider, see how it’s made in the stainless steel tanks and oak barrels and maybe even be a guinea pig for Belochi’s and Smith’s next inventive batch.

“They might have the owner in their ear; I trot out experiments all the time,” Belochi says of visiting the BOCO Cider taproom. Because this breed of cider takes advantage of the very modern ideas of collaboration and creativity. What’s old is new again — only better.