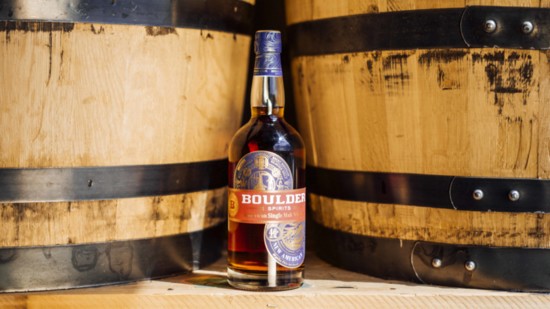 The Man With The Plan

American Single Malt Whiskey Is About to Take Off, and Boulder’s Vapor Distillery Is At The Forefront

If you’re going to tackle new frontiers, tackling new frontiers in whiskey is about the coolest frontier you could pick.

Alastair Brogan, owner of Boulder’s Vapor Distillery, is doing that for American single malt whiskey, a spirit category that, until recently, has been woefully underrepresented here in the U.S.

But he’s not doing it for the cool factor; his reasons are pure. The Scotsman just wanted to make the kind of single malt whiskey he loved in his native Scotland.

“This was always my ambition,” Brogan says. “I’ve got a passion for single malt whiskey.”

So after winning prestigious awards for Vapor’s gins and bourbons, Brogan and his team set their sights on making a world-class American single malt whiskey, a fairly new category ready to explode.

Before it explodes, though, most of us need to learn what, exactly, an American single malt whiskey is. What’s the difference between that and what we’re used to from American whiskey makers, like, say, Jack Daniels? Or the single malt whiskeys from around the world? (Most famously, Scotch.)

Traditionally, most American whiskeys have been made primarily from corn or rye. An increasing number of distillers, however, have been creating single malt whiskeys, made from 100 percent malted barley. The barley has more depth and complexity, giving the spirit a nuttier and malty flavor.

Brogan got going in February 2015, when his 1,200-gallon copper pot still, specially made in Scotland, arrived in Boulder. Of course, good whiskey, like healing a broken heart or waiting for the Bill & Ted reboot, takes time; it was less than a year ago that Vapor debuted its three expressions of American single malt whiskey: New American Oak (the gold standard), Peated Malt (smokier), and Port Cask (fruitier).

The response has been great. The whiskeys are already winning awards, and, maybe, more importantly, they’re making converts out of skeptical Scotch makers.

“I’ve taken it over to Scotland to major distillers, and they’re praising what we’re doing,” Brogan says.

The ingredients for whiskey are extremely brief and simple—water, barley, yeast, and the barrel used to age the whiskey—which means that the quality of each ingredient is inordinately important. Luckily, Vapor Distillery has one major advantage.

“The water here in Colorado, and especially in Boulder, is spectacular. We use glacier snowmelt water for the processing and Eldorado water—voted the best municipal water in the world—to proof it down,” Brogan explains.

They import the barley from the UK, because one, it’s what Brogan knows, and two, the Scots have mastered this over the past 400 years.

“The Europeans are advanced when it comes to malted barley for whiskey—like the Americans are good at the corns and the ryes,” he says.

Another difference between the European single malts and the American is that here, the whiskey mostly goes into new oak barrels.

“That is a colossal difference in the taste profile,” Brogan says. “Because of the barrel you get more of the oak flavor associated with bourbon, and you get a lot of the sugars from the caramelization of the oak. That’s why the American single malt whiskey will be a little sweeter.”

Then—voila!—three or four years of aging in a semi-arid environment later, you get an American single malt whiskey. Or, in other words, a 92-proof, robust, highly sippable new frontier.