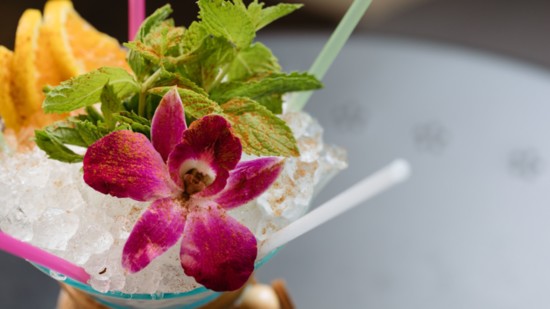 The Renaissance of Modern Tiki

Birthed at the dawn of World War II, maturing into one of America's most enduring forms of escapism, and currently taking a resurgent breath within the modern renaissance of the historical cocktail, the all-American phenomenon of the Tiki bar is a cultural icon that is both fantastical and garish.

The industry is experiencing a new wave of consumer consciousness. Tiki, in general, is having a harder time standing up to the demands of historicity, quality, and authenticity. Accordingly, Jungle, West Pearl Street’s newest island bar and landmark institution, has risen to the challenge.

While first and foremost a Tiki Bar, Jungle exhibits a conscientious reflection of the islands it represents and is an advocate for the artisanal spirits and food of the Carribean.

Tiki itself is forever tethered to World War II. As war vets returned from the Pacific theatre, American familiarity with Polynesian cultural motifs became a source of hazy fascination and, as a modern psychologist might retroactively diagnose, post-traumatic escape.

Don the Beachcomber was Raymond Gantt’s inaugural Caribbean Tiki bar, and an instrumental muse for Jungle. Founded in the 1930s, it was exactly the refuge people needed. Trader Vic, another well-known Tiki name, came into the scene shortly after, expanding the culture by way of the infamous Mai Tai.

The bars toted ambiance, flavors, and rattan furniture that embodied a distorted fantasy for something vaguely Polynesian—a beloved, albeit gaudy, cultural fabrication.

Jungle does an admirable job navigating the complex discourse surrounding the history of cocktails embellished with patio furniture. A walk through their cocktail menu is a walk through the history of rum, a surprisingly misunderstood yet integral ingredient to the entire concept. Jungle explores the entire history, beginning with the first evidence of distilling cane juice into ‘rhum’ starting in 200 B.C. in the kingdom of Gandhara.

Jungle’s attention to detail from Tiki history to the late-night Carribean bites is not surprising. Jake Novotny, partner, and general manager, and his entire team come from a fine-dining background. No member of the staff would have a problem explaining the difference between a full-bodied Guyanese rum, distilled from fermented molasses, and the pure cane juice-based rum distinct of Martinique, slightly more elegant, grassy yet floral, with a noticeable dirtiness.

Novotny explains further that because of the renaissance of the Tiki Bar, rum producers in the islands are being afforded the opportunity to create classifications to standardize and characterize their production, a nod toward the vitality of the industry

None of this reflection and forethought comes as a surprise. Novotny and his team have an uncanny ability to move honestly through the crass characterization of island longing, creating an experience that feels more like a vacation to the tropics than an escape from something sub-par.

Jungle is a conscientious reflection of the islands it represents, an advocate for the artisanal food spirits of the Carribean, but first and foremost, a beloved Boulder Tiki bar.