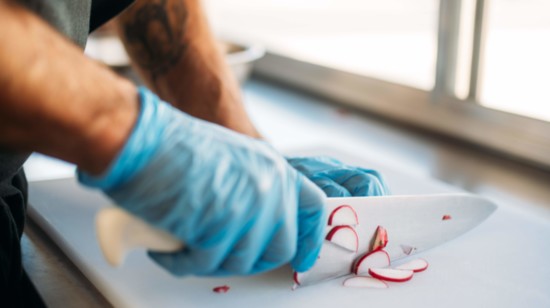 Tasheena Polanco was living in a halfway house when she heard the intercom announcement that would change her life. Work Options for Women (WOW) was holding an informational meeting in the house’s cafeteria.

“The words ‘Work Options for Women’ just spoke to me,” Polanco says. “I needed to do something with my life, and I was really curious about what their work options for women were.”

At the time, Polanco wasn’t exactly optimistic about her own options. She’d finished serving five years in prison and relapsed while out on parole. Luckily, her parole officer saw her incredible potential and willingness to take responsibility for her life.

He sent her to a halfway house for more structure, but she wasn’t able to get a job immediately and became stressed about her accumulating debt.

That’s when she heard that life-changing intercom message.

“I was getting depressed and discouraged with rent stacking up and not having a way to provide for myself. I heard an announcement over the halfway house intercom…that was pretty much music to my ears,” Polanco says.

Polanco went to the meeting, where she learned that WOW trained people like her to get the skills they needed to work in a professional kitchen. Everything from how to use a knife to food safety issues to how to build a resume. And the kicker? They’d help her out financially while she took the four-week class, plus another couple weeks while she looked for a job.

“I got a job in a kitchen, and I got to utilize all these skills I learned in class and apply them to a real-life employment situation,” Polanco says. “I started with $3,000 in debt, and I was able to get myself out of debt.”

Now, Polanco works at WOW, helping other struggling individuals of all genders learn the skills that helped her move forward in her own life. She’s the assistant chef instructor on WOW’s mobile culinary classroom, which takes the group’s prep cook certification program directly to halfway houses.

WOW exists to help people like Polanco. For the past 22 years, they’ve trained more than 3,000 individuals to get jobs in the food service industry, empowering them to change their situations through their own efforts. Besides the essential training, WOW provides the on-going support — be it financial or providing therapy or giving plain old encouragement — needed to find and retain stable employment.

Accomplished local chefs have taken notice, including James Beard Award-winning chef Jen Jasinski, of Rioja, Ultreia, and a few more of your favorite downtown restaurants. She wanted to get involved with a charity that helped individuals, specifically in the food industry, and WOW fit the bill. Over the past several years, Jasinski has helped out with fundraisers and worked with WOW’s students.

Jasinski believed in the program so much that she chose WOW as her non-profit partner when she appeared on Bravo’s popular culinary competition TV show, “Top Chef Masters” in 2013. All of her $35,000 in winnings went to WOW.

Money that Jasinski, and many others, know is well spent.

“It’s amazing going from (having) no skill set to now,” Polanco says. “I just got an apartment for my mom and my two daughters. I’m paying my rent, all my bills. And now I get to help people who were in my situation and show them they can do it, too. I’m super thankful for everything they had to offer me at just the right time.”