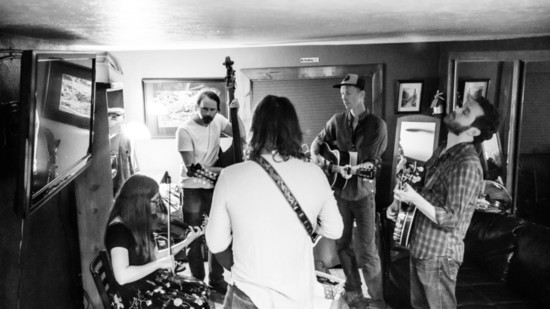 Trout Steak Revival is known for their progressive, outside the box sound, inspiring lyrics and positive, upbeat demeanor.  It's no wonder this dynamic quintet has increasingly won the hearts of Colorado’s thriving bluegrass community.

After winning Telluride Bluegrass Festival’s band competition in 2014, the group released their fourth album, Spirit to the Sea in 2017, and played 180 shows in the last two years. While being a successful band is one part of the story, tour life isn’t always as glamorous as what you see on stage.

We caught up with Steve Foltz from TSR to talk about life behind the scenes. We left the meet and greet deeply inspired by his willingness to openly share what’s strumming in their hearts as we begin 2019.

After a long pause last winter, the band is firing up their brand new, currently unnamed red Sprinter van. Foltz laughed at the idea of naming it Adam La Van, a twist on the lead singer of Maroon 5, Adam Levine, though a fan's suggestion of Patty Ketchup was also a top pick (TSR’s last white van was Patty Mayonnaise). TBA. Foltz welcomed the time off from touring as a paternity leave for his newborn child.  After the break, TSR starts this year with a drive for exploration and to release smaller albums more frequently to keep things fresh.  Foltz shares, “at some point you have to come up with a successful model that keeps you going…get a pattern going that works for us”.  Producing music is not cheap, and with two Kickstarter campaigns under their belt, they’re looking for new ways to be sustainable.

When can fans expect new music from Trout Steak Revival? According to Foltz, late spring/summer they’ll likely start to release three-to-six song EPs.  With consumers streaming various songs and bouncing around genres and playlists, the band sees the value of serving up digestible enjoyment instead of the usual full-length LP.  The shift to bite-sized albums is also a sign of the times.

As for recent accomplishments, the band is committed to rejuvenating their connection as bandmates and spent the new year clearing any outdated expectations or misunderstandings in their relationships. Foltz shared that they, “started to talk about all of the stuff, all of the barriers we put up, all the ways our communication has become less than fluid.” People change over time, including interests, expectations and desires; this natural evolution certainly does not exempt musicians. It can be easy to gloss over the not so comfortable parts of being human, but it’s all part of the process when you’re spending countless hours on the road in close quarters and creating potentially vulnerable pieces of personalized self-expression.

“Creativity is so trust-based and being in a band is a trust-based thing, we started to realize expectations equal trust, and we haven’t always been communicative about our expectations.”

Foltz is “happy to report that I’m really excited about the band and that we’re in a new place with each other, on a creative level too.”

Through thick and thin, Trout Steak Revival is here to stay.  The band has hit the refresh button and fans will likely hear much of their realizations and reconciliations reflected in their upcoming new music and shows.

A Few of Their Favorite Things …

Call it nostalgic or traditional, Foltz is a big fan of listening to entire albums.

No shame in HBO binges, these shows are a surprising source of inspiration for TSR.

As a new dad, Foltz expressed the beauty and simplicity of watching his baby experience life. He’s inspired to put words to this sense of awe he feels.

Foltz and his wife, Jen Middleton, spent time co-creating last year as a side project to mix up the routine and find new outlets for their expression together.

It is common to see musicians riffing around a fire during festivals, learning new songs, and experimenting.  An explosion of startup bands provides tons of opportunity to collaborate and ideate.