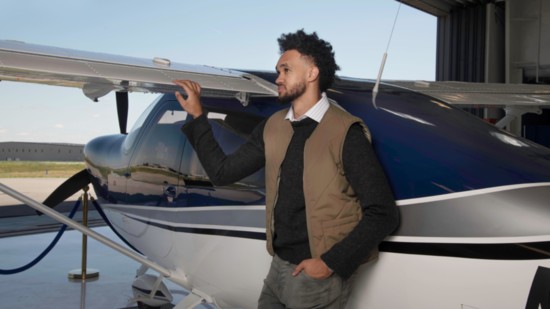 When Derrick White first arrives at the Blue Sky Aviation Gallery on a hot summer morning, he’s dressed in his usual attire: gym clothes. The Parker native and San Antonio Spurs guard says this is where he lives, in T-shirts, basketball shorts and sneakers.

But today, he’s trusting professional stylists who have curated outfits from area high-end men’s boutiques and the season’s hottest finds for a magazine fashion photo shoot. By the look on Derrick’s face, he’s a bit uncomfortable.

Derrick’s longtime coach, Marcus Mason, who is attending today’s photo shoot, says it figures. Derrick has always been laser-focused on his goals, which means basketball.

“I’ve worked with a lot of kids and seen them grow up, and I can tell you Derrick’s always been mature,” Marcus says.

The owner of Nothing But Net Elite Basketball Coaching in Parker, Marcus first started coaching Derrick when the 25-year-old was in seventh grade. Whereas some professional athletes or new-found celebrities would bask in the spotlight, Marcus says, Derrick just wants to know when they’re hitting the gym.

By now, Derrick’s rising-star story has been well told: The Legend High School basketball player, overlooked by NCAA Division I schools, spent the first three years of college playing for DII University of Colorado – Colorado Springs. With grit, determination and leader performance at UCCS—along with an extra five inches of height after high school—Derrick was able to transfer to the University of Colorado. Shortly thereafter, in 2017, Derrick became the first-round, 29th draft pick for the San Antonio Spurs.

“It’s been a blessing to play in the NBA and be a part of the Spurs,” Derrick says. “Reaching a dream that you had when you were growing up, it’s truly a blessing.”

Derrick credits his family for any success he’s had.

“They still live in Parker, in the same house that I grew up in. My parents are incredible. They’ve supported me in everything that I’ve done and been there and loved me throughout. They are the best role models I could ask for,” Derrick says.

Right now, Derrick is enjoying some downtime at home after his name-making success in the Spurs' playoffs. Derrick scored 36 points on 15-of-21 shooting in Game 3 against the Denver Nuggets. But that Game 1 dunk against the Nuggets’ Paul Millsap? It made T-shirt status with its “Dunk It Like Derrick” slogan. Go ahead, YouTube it.

Derrick, who was already gearing up to play on Team USA’s junior team, just got called up on Aug. 9 to fill a vacancy on the senior team in advance of the FIBA Basketball World Cup in China, yet another measure of Derrick’s rising-star status.

Marcus says that through it all, Derrick has stayed the same. Even at barely 6 feet tall and being passed over by virtually all programs out of high school, Derrick kept hustling, never becoming disgruntled or blaming others, Marcus says.

“He’s unwavering,” Marcus says. “His inner willingness to be great is something I’ve never experienced before.”

Sweater Our Legacy | Available at Steadbrook boutique in Denver | $240