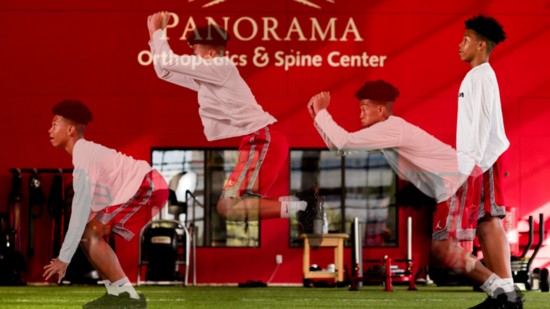 Playmaker, Game Changer, Phenom. Football coach Sean White grew up surrounded by competitive excellence, including family members in the NFL and NBA. He played football at Montbello High School and Chatfield High School’s renowned program under coach Dave Logan, then Division 1 football for the University of Tennessee Volunteers. After graduating in 2010, he worked in corrections before founding Phenom Phactory Football Academy in Highlands Ranch as a way to make a positive impact in the lives of youth.

Building relationships is what inspires Sean; with his family, on the field with teammates and coaches, with kids, and the relationship one builds with oneself in overcoming obstacles and reaching goals. Sean saw the great benefit these relationships offered him and other athletes.

As a college athlete, Sean says, “You’re exposed to so many things, different careers, different parts of how the world works, an education." This is a legacy he wishes to provide for all kids.

“The opportunities that came with being involved with sports, I felt I wanted to provide that to those who came after me. It's not necessarily just about training athletes, I wanted to use it as a channel to mentor," Sean says.

Sean saw his dad inspire many community kids, both as a football coach and at the local recreation center. Sean tells the story of a young man who moved to Denver from another country without speaking English, certainly not knowing a football three-point stance, struggling in school. Sean’s dad mentored him, and he went on to play collegiate football at Georgia Tech, and now serves as the vice president of a large, national financial institution. There were many similar stories over the years. So many in fact, he became known as a phenom maker.

Now in its third year, Phenom Phactory grew out of what Sean witnessed his dad give to community kids every day. “I took what my dad did for us and put some structure to it and expand it," Sean says.

In partnership with Panorama Wellness and Sports Institute, Phenom Phactory provides football skills training, as well as speed and agility training for organizations like Cherry Creek High School’s football program. They work with the Denver Foundation to provide scholarships. Having kids from all walks of life train together bridges the gap "Everybody feels like they are on a level playing field and can understand each other’s perspective," Sean says.

Steve Hess, director of performance for the Denver Nuggets and at Panorama, says Sean has developed a unique football program that works with athletes not just on strength and conditioning but on football intelligence. "Phenom Factory at Panorama Wellness and Sports Institute further separates themselves from other programs as they utilize revolutionary objective testing," Steve says. "I highly recommend this program."

Sean says some kids show up with the understanding that their investment offers rewards that instant gratification doesn’t. Others demonstrate the tenacity that facing significant challenges brings.

All the athletes learn the “life skills that come from playing sports; time management, dealing with adversity, teamwork, perseverance.” Because ultimately, whether a student athlete plays recreational football, at a D1 university or in the NFL, these are the skills that lead to success.

LINE HOPS: Rapid response drills activate the central nervous system for performance at top speed. Take an athletic stance in front of a line, such as crack in the sidewalk or pavement. Hop over and back as fast as possible for 5-10 seconds.

THE STEP-UP: Stonger muscles are faster muscles, which increases starting speed. Stand in front of a bench, box, or chair. Place one foot firmly on top. Drive the opposite knee up until your hip is at a 90 degree angle. Hold this position for one second while staying tall and tight. Repeat with other knee.

THE BROAD JUMP: Jumping teaches your body how to handle downward force, which builds explosive leg power. Start with your feet shoulder width with arms straight up in the air. Drop into a squat, swing arms down and back as far as you can. Swing your arms the opposite direction and throw your body forward as hard and fast. Stick the landing.