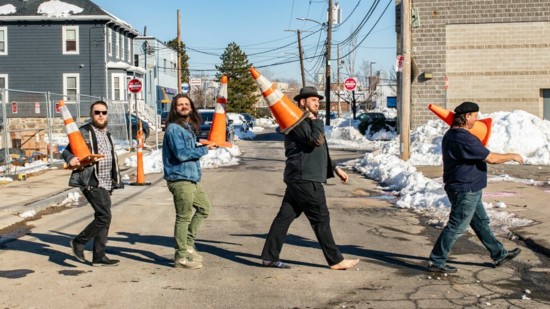 Going with the Flow with Pink Talking Fish

Once In A Lifetime

For bassist Eric Gould, a touring musician with his band, Particle, performing tribute sets was a bit of a foreign concept.

But while living on a lake in Kansas City, looking for pickup gigs, Gould was offered opportunities to play tribute sets. As he was enjoying performing the music of Phish with friends, a light bulb went off, and his musical world changed forever.

Now heavily invested in the tribute music world, Gould had an idea that was a bit different from the traditional mold: He wanted to create a setlist that combined the psychedelic sounds of Pink Floyd, the oddities of Talking Heads, and the grooves of Phish.

So, he did just that.

“I was really jazzed on the tribute world, but I had an idea that I wanted to do something unique with it, something that hadn’t been done before,” says Gould. “So, I took three of my favorite bands that I thought would go well together, put them together, wrote down a setlist that I thought looked amazing, and got some guys together to play. Once we were on stage and felt the energy in the audience, we knew we had something special.”

Now more than six years into its existence, Pink Talking Fish has earned a reputation for exciting and unpredictable setlists and wildly entertaining shows.

“Without a doubt, one of the top live music experiences on the jam scene today!”

As a special treat for their Nederlands and Denver performances in December, Pink Talking Fish will also incorporate music from the Beastie Boys.

The life of a touring musician is always an unpredictable journey. Though Pink Talking Fish may not be what Gould envisioned for himself during his days living on a lake, he and his bandmates are going to make the most of the moment.