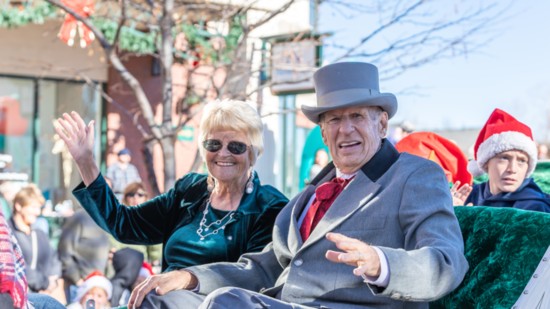 Share the timeless experience of Christmas cheer with king and queen of the parade, Fred and Jan Wehrli.

Bells jingle and horses trot down the streets of Parker around Christmas, along with a new king and queen of the Christmas Carriage Parade, Fred and Jan Wehrli.

“I was speechless when they did it, but feel very honored,” says Jan.

The all-equestrian exhibition brings Christmas cheer year after year. This Dec. 14, it will be held at noon in downtown Parker. Depending on the weather, they see as many as about 5,000 people line up the Mainstreet to celebrate Christmas at the parade.

Fred and Jan became involved in the parade about 30 years ago simply because they’re horse people. Jan started out as the announcer and was for many years. She says they were surprised last year when they were made grand marshal.

They were appointed king and queen in September by special events and sponsorship coordinator of Parker, Brooke Spain.

"They said it was because of all the years of service that we’ve given to the town of Parker,” Jan says.

The first horse they started driving in the parade was back in 1992. Fred says they provide volunteers for the parade as well as orchestrate the staging.

“We’ll always be involved with the parade, we’re part of the parade committee,” Fred says.

Although they don’t reside in Parker, they have loved how welcoming the town has been to them. They breed and raise Rocky Mountain horses on their ranch, Spring Meadow Farm in Larkspur Colorado.

“They welcomed us as part of their family,” says Jan.

A stallion of theirs, named Light-footed Dusty, was in the parade from 2 years old up to age 25, until his passing about five years ago.

“We’ve only had Dusty in the parade, and he was there until he was 25,” says Jan. “He was just one that–I mean–you could dress him in pants and a hat and socks, and boots and he didn’t care.”

Fred and Jan love the horse and buggy aspect of the parade.

"I just think it’s a great parade for the town to show how much horse country is in Douglass County,” Jan says.

Jan feels a sense of community every time she’s at the parade; her granddaughters have ridden in the parade, and she has a lot of friends.

“Parker is a very horse-friendly community, and so it’s just neat to go to the parade and catch up with all the friends you may not have seen since last year.”

Fred loves that the Christmas Carriage Parade has grown over the years and is immensely grateful.

“We just think Parker’s a great town, and we love the people and everything in it ... so we love putting it on,” Fred says.

Initially, the Carriage Parade began in 1984, but the town took over and has been putting it on for the community since 2005. This year there will be a new feature to the Christmas Carriage Parade called the North Pole Pass and is for children ages two to ten. For more information, ParkerOnline.org or contact at 303.805.3253.