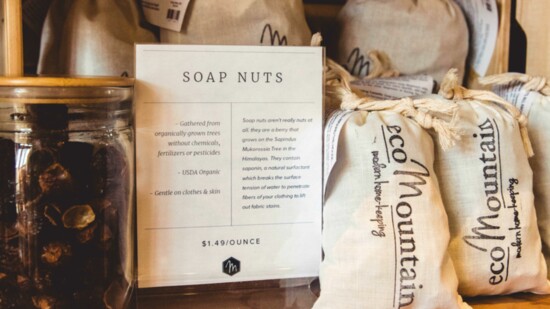 Simplifying the Way to Abundance

In the beginning, there was a flourishing garden. It bloomed with an abundance of fruit, vegetables, flowers, and trees. Every living thing lived in peace with one another, and it was good. The first humans were charged with the awesome responsibility to steward the earth. They were founders, and they were farmers. That’s the story that Dee Larsen believes, and she is committed to carrying out that responsibility countless years later with her family store, EcoMountain. EcoMountain merges the simplicity and wisdom of the past with today’s cutting-edge technology by carrying a wide range of eco-friendly, toxin-free, and sustainable home products.

“We are trying to ease the general population into an eco-conscious mindset,” Dee says.

“People usually require a personally felt need in order to change their lifestyle.”

Though she’s had a green thumb for as long as she can remember, Dee’s ‘felt need’ heightened when she and her husband, Dan, began to grow their family. Self-described as young, broke, and living on a couple of acres outside of LoneTree, Dee decided that she could make their lives rich again by cutting energy costs, growing her own food, and making her own cleaning products. As she slowly simplified, their lives grew more abundant. Twelve-foot-tall sunflowers towered over their children as they played and organically fed turkeys and chickens pecked at the ground around them.

Time passed, and Dee continued her suburban homestead-chic lifestyle. She was always on the lookout for natural, eco-friendly products, but no easy one-stop-shop existed. In an effort to stop the scavenger hunt, her husband suggested that she start her own store. There was another factor at play, too— the health of her daughter, Cindy. Cindy and her husband lost two babies, and Dee has a hunch that the cleaning supplies her daughter used excessively had something to do with it.

“I think her body was just poisoned, and that’s what happened with the babies,” Dee says. “I started showing her how I made my homemade cleaning products, and she flipped out. We started testing them on everything!”

Shortly after, Cindy became pregnant with a beautiful little girl who is now four years old. Dee believes her lifestyle change had something to do with it. In 2016 they opened their flagship EcoMountain store in Denver's Sunnyside neighborhood (now closed). In 2018, they opened a second location in South Denver at Park Meadows Mall.

Today, EcoMountain is a quiet, clean blip in the middle of the bustling mall. Refreshing scents like peppermint and orange oil greet customers as they enter the store. A table in the shop's front-center allows customers to curate their own natural cleaning supplies such as laundry detergent, dishwashing liquid, and all-purpose cleaner at comparable or cheaper prices than most brands. Dee’s son, Nate, runs a lot of the show and walks customers through the process.

In addition to creating-your-own cleaning supplies, EcoMountain sources several alternatives to products typically laden with toxic materials. Brands like Full Circle offer everyday products made with bamboo (a durable, plentiful, and easily recyclable weed) instead of plastic. Items like soap nuts— berries that resemble walnuts— can be tossed into a load of laundry as a substitute for detergent. Dee claims they have just as much cleaning power, if not more, and can be used several times. For the next step of the clothes washing process, EcoMountain carries dryer balls. These are an alternative to dryer sheets that can last for decades. Not only do they naturally benefit the softness and scent of freshly laundered goods, but they reduce energy and drying time as well.

For a short period of time, Dee says that EcoMountain was the only store open (out of the Park Meadows Mall’s 180+ shops) during the Coronavirus pandemic because they are considered an essential business. One coveted item made them especially popular— their organic toilet paper. Made of bagasse, a byproduct of the sugar cane industry, this tp kept savvy Parker residents stocked up during the pandemic’s shortage.

Everyone may not be ready to commit to organic toilet paper, and Dee and Nate understand that no one can be 100% environmentally-friendly. But, everyone can do something, whether it’s storing food in reusable plastic bags instead of Ziplocks or carpooling regularly.

“When we buy something, we have to think—what’s the real cost?" Dee says.

A National Geographic article by Laura Parker alludes to what that cost may be. She writes, “With no improvements to managing waste beyond what’s already in place today, 99 million tons of uncontrolled plastic waste would end up in the environment by 2030.”

Jenna Jambeck, a University of Georgia engineering professor, says that number would be the equivalent of one dump truck tipping a load of plastic into the ocean every minute every day for a year.

Dee’s motivation for people to educate themselves on environmental realities can be summed up in one word— love.

“We knew we wouldn’t get rich with this store, but that’s not the point,” she says. “At the end of the day, we are all in the world together. I think that’s the point of life— to see every human as so valuable, unique, and precious to God.”

Nate can attest to his mother's love for others, their health, and their environment.

“She’s always about helping people— I’ve seen that in just about every motivation she’s ever had,” he says.

The Parker community has turned around and loved her right back. There is an inherent synergy that runs throughout local communities, whether residents see it or not. Just as every action has an equal and opposite reaction, every choice we make has an impact on someone or something. This connection is the bread and butter of EcoMountain's philosophy. It is a connection that the staff hopes people will make to the wellbeing of the earth at large, too. According to Nate, loyal Parker customers have stepped up during the economic hardship of the past year.

Visit EcoMountain on the first level of the Park Meadows Mall, or check them out online at ecomtn.com. 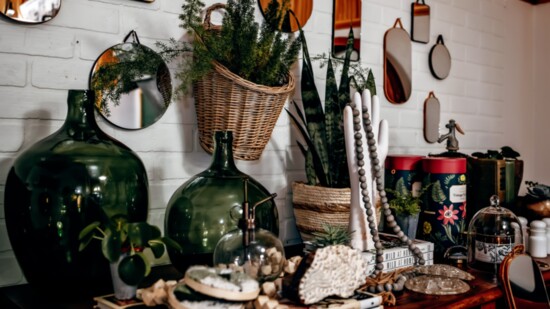