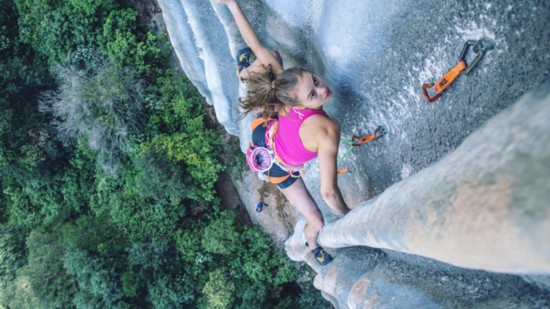 Send It On Up

The weekend following Thanksgiving Day is one of the most sobering moments of any given year. After all of the turkey, stuffing, pie, and wine has been consumed, reality begins to set in: It’s another Monday, another work week.

At the end of November in 2019, Boulder-based Climber Margo Hayes had quite the jump-start to shaking off her post-Thanksgiving haze: She was in Toulouse, France, competing in a climbing tournament, attempting to qualify for the 2020 Olympics in Tokyo.

Hayes, 21, has quickly risen the ranks of the climbing world, showing dazzling flashes of brilliance as an athlete. In 2016, she became the first female climber to ever climb a route graded 9a+, and has since completed two more routes of the same difficulty level since.

But like anyone else, Hayes requires a little push to reach her goals. In January as much as in July, her climbing goals are directly tethered to her willingness to be patient with herself and push beyond what she believed her previous limits were.

While it's still TBD if she will end up competing in the 2020 Olympics, it is undeniable that Hayes is already taking her sport to new heights.

What does your training regimen look like during the winter? How does it differ from the warmer months?

Most winters, I spend my time training in the gym to prepare for the USA National Championships in February and March. I do try to get in a little bit of time outside, but it’s rarely in Colorado, because it’s so cold at that time of year. In the summer, I am better able to spend time at walls and crags in Colorado, alongside my training in the gyms.

How has your training evolved/changed since qualifying for the 2020 Olympics became a possibility?

When qualifying for the 2020 Olympics became a possibility, I began to learn how to Speed climb, which was an entirely new discipline for me. I took some trips to Atlanta, Georgia, with Ukrainian speed coach, Olexiy Shulga. He helped me learn the movements and methods for becoming faster. Although I incorporated speed into my repertoire, I still mainly focused on training for Bouldering and Lead.

What's been the most difficult or surprising part of trying to qualify for the Olympics?

The most difficult part of trying to qualify has been maintaining balance in my life. When climbing was announced as a new sport in the Olympics, I was just starting my gap year after high school, and my life focused was more around climbing than it ever had been in the past. It is wonderful to be so dedicated to something you’re passionate about, but it can be easy to lose touch with other parts of oneself. I’m always learning and readjusting in order to keep balance and address all sides of who I am. This took a couple of years to realize, but with more maturity, it’s something I now give more importance.

How do you maintain a healthy mindset while competing? How do you not become overwhelmed by a moment?

Maintaining a healthy mindset is a tricky task. There is no simple algorithm. Every competition is different because there are so many internal and external variables. At times, focusing and digging deep is what you need, while other times, it’s more effective to let loose and focus on having fun. There is no right or wrong. Yes, it can be overwhelming at times, therefore it’s something that I continually learn to manage.

Was there a particular moment when you realized you had the potential to compete against the best climbers in the world?

I am not sure if there was an exact moment when I realized my potential. However, as a child, I didn’t believe that anyone was incapable of anything. Of course, this is an extremely simplistic view on life and reality, but I do believe it kept me from putting limitations on myself as a child. I have always had big dreams. When I was young, I thought that if I worked hard enough, absolutely anything was possible. As I grow older, I maintain my value of hard work. However, I have also learned that life is complex, and sometimes with hard work alone, we don’t land exactly where we had imagined. I think that it is most important to focus on the process and not simply the outcome; to be flexible and open to change and growth.