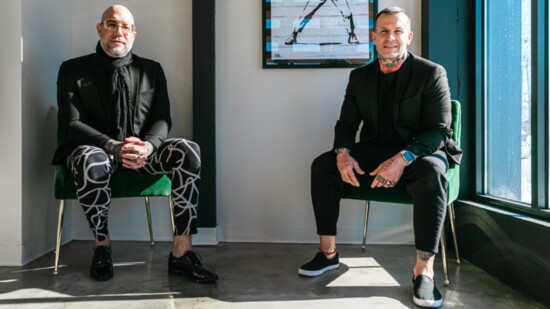 The Art of the Salon

The name, Salon Dada, stems from the Dadaist movement started in Zurich over 100 years ago. Dadaism traveled through Paris and flourished in New York, breaking apart pre-war intellectual precepts, art, and aestheticism. Its followers questioned everything from language to government, creating a culture of non-conformity and challenging the “toxic” conventions which presumably led to WWI.

Benjamin, in a moment of prescience, purchased the domain 20 years ago. “I was drawn to the name and [Dada’s] anti-violence, anti-racist ideology.”

A heady namesake for a salon. But Benjamin and Steven’s fortitude and vision make it perfectly accessible.

They met while working at Peter Coppola and have both tamed coifs for years at local styling spots, garnering a loyal clientele. Recognizing their synergy and appreciating each other’s skill, they decided to open their own place.

During the planning stages last March, Covid hit and the salon in which they worked was forced to close. Intent on opening their salon and providing for his family, Benjamin walked out, got into his car, and drove straight to Whole Foods to apply for a job. When there wasn’t one available he found work stocking supermarket shelves for Pepperidge Farm. Steven walked into FedEx, Home Depot; anywhere who might be hiring.

“At your worst times you have to keep the faith and believe it’s going to work out,” Steven maintains. The seemingly tenuous thread of faith was the spider’s silk that humbled them to accept whatever job they could, regardless of their expertise and professional careers. It’s also what saved Steven and Benjamin at times throughout their lives.

Like most success stories, there were setbacks along their journeys. Both had experiences rocked with hard edges and sharp turns. “He had downs and I had downs, and we helped pick each other up,” recounts Benjamin of his and Steven’s friendship. “Like Mike Tyson said, ‘Everyone has a plan until they get punched in the mouth.’”

Yet each sock in the face made them stronger, more determined to create a business in which artistry and individualism are king and to defy similar constructs Dadaism refused to subserve. In short, they’re not counter-cultural but they are doing it their own way. “We don’t want be too eccentric,” notes Steven.

Walking in, you notice a stylish, fresh salon. Steven and Benjamin have a devoted following because they’re fabulous at hair and have a terrific eye. You’ll also notice a current of joy and respect for creativity, an appreciation for individualism.

A Banksy print on the first floor is an homage to their love of street art and its rebellious commentary. They’ve reached out to successful artists for rolling art displays of their paintings. Not to sell, though; for people to enjoy and appreciate, diminishing the barrier between “art” and the artistry of hair which commerce has necessarily de-classified.

It could be said - actually, it has been said - that Steven and Benjamin are manifestations of their vision. Yes, they are local fathers - Benjamin has three children in Westport public schools. Yes, they are successful business owners. But do they look like the typical Fairfield County professional? Not so much. Each has extensive tattoos illustrating personal events, themes, and beliefs (“a little bit of pain, a little bit of luck”, “proud and gracious”). They’re arguably hipper… well, not “arguably.” They are hipper than most guys around here. (But don’t worry, most guys, you have other outstanding qualities.)

Further, the Dada ideology inspired them to instate a zero tolerance mandate for criticism, gossip, and derision in their new salon. They’ve witnessed the recklessness of judgment. “When you see how people are brought up, you realize they had no choice in being who they are,” says Steven.

While we spoke, a group of employees walked through, chatting amiably. “People came to us for hire,” Steven says of their crew. “We haven’t really ‘looked’ for anyone.” Benjamin added, “When everything was first installed, I just walked around and couldn’t believe it - what a blessing.” As he spoke his wife looked on, beaming at her new husband.

The warmth and enthusiasm they exude is almost palpable, making the the salon feels like a luxurious clubhouse. But they did open during the height of Covid, so I had to ask it was difficult.

“Not at all,” Steven replied. Then smiled, “I’m a germaphobe.”