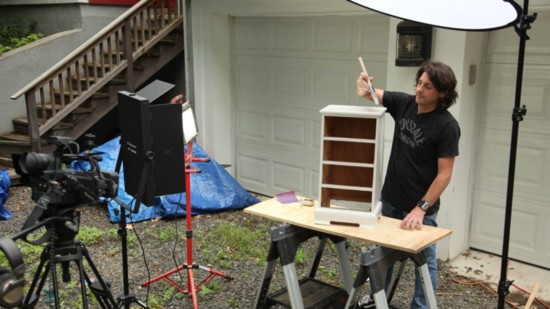 Hey. You. Bored yet? Haha! Of course you are! It’s been Groundhog Day for months now without the frivolity of an actual quasi-holiday. The only movie you haven’t re-enacted for your Facebook friends is Angry Birds 2 and you seriously considered ordering “The Last Supper” from Paint-By-Numbers.

Plus, you don’t know which is worse: the frequency with which your child toggles from on-line lessons to YouTube or the fact you no longer care.

Realistically, many things are different and will remain so after we motor through COVID-19. Some things will slow down (the economy), some things will accelerate (toilet paper production).

Take online learning. College tuitions are decimating the savings of every parent who attended college, so we should expect the acceleration of alternative methods of learning, such as the one we are forced to acclimatize to today.

We need someone who makes online learning fun, who entertains while instructing and truly loves sharing their knowledge. Someone like… our own Brian Kelsey!

You may know Brian or have heard of him. He’s a licensed carpenter and TV host who also recorded numerous DIY segments on TODAY and The Martha Stewart Show. As a senior video/editor he founded The Lower Third Productions where he creates, in part, the How-To videos about which this article is written. He’s a cinematographer, recording engineer and musician (drums, guitar, organ, vocals). He’s also a voice-over actor who you’ve heard a million times without knowing it. And if you go way back, he was the voice on the Howard Stern Show that lended the broadcast an intellect and gravitas it never truly deserved.

His myriad of expertise is wildly impressive and kind of difficult to fathom. Even more so because — wait for it - it’s all self-taught.

Seriously. Watch his videos. In addition to learning about tools and craft, you’ll also enjoy watching the length of his hair fluctuate.

He imparts his expertise with the clarity and humor of a seasoned TV host, throwing in the special effects of a tech professional and the cinematography of a real, live cinematographer.

This mix is most evident in his series of Talk Show videos. Brian, a lifelong lover of Late Night, explains, “I needed an idea for another video and I really wanted to make a desk. So I made the Johnny Carson desk.” In an entertaining montage including Late Night footage, he takes viewers into his crappy garage and walks them through the construction of Johnny’s desk.

After creating this desk, Brian stood back and saw that it was good. So good, in fact, he decided it should have its own Late Night Talk Show backdrop. He then recorded a video how-to about designing and building a diminutive set next to his washing machine. In it, he offers advice such as the proper location of the desk and what types of images to use for background.

But a set isn’t any fun just sitting in the dark. Cue: videos on lighting design/installation and setting up cameras. He explains how to reduce heat and glare by throwing a heavy blanket over certain light sources and how to not look scary on screen. And presto! A working TV/YouTube video studio!

Guess what videos he does next? Yes! How to Talk On Camera, How to Interview ANYONE, and more. Then he composes and records his own theme music, playing every instrument himself.

“Then I thought, wait - we live around so many celebrities!” So he invited local celebs to the nether-regions of his home, filmed them chit-chatting with cocktails, and edited it down to 10 minutes. The result is a witty, engaging bite-size talk show: Ten Minutes With…

He does all the filming, hosting and editing himself and admits, “I have six cameras running and audio so it’s kind of hairy.”

When our quarantine lifts, Brian plans to do more DIY videos and talk shows. For now, find him on YouTube and learn how to make something new during your home internment. It’s fun, it’s educational, and you haven’t already watched it five times.