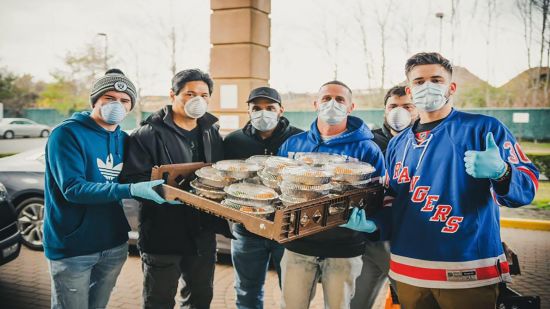 2 Chefs Provide Meals for Those in Need

Twelve years ago, James Destasio was a casualty of the recession in 2008. Back then he was a talented builder, with a passion for cooking. When the housing market fell apart, he turned his attention to cuisine. He worked part-time at various Long Island restaurants, which grew to a full-time profession as a chef.

In recent weeks, James is again faced with a national crisis and a job loss, but this time it’s different. It’s not a bubble in real estate or stocks; no this pandemic is something none of us has ever seen or imagined. However, when something challenging occurs, it can be a catalyst for a new beginning, and that is exactly what’s happened.

James found Ryan Carroll, a chef also out of work as his business Carroll’s Kitchen was also suffering from the current pandemic. The two friends realized they had an opportunity to help people. To use their expertise as chef’s to provide hot meals to those in need.

Their model was to create an affordable to-go meal service, working from their homes and then using the proceeds to get hot meals to veterans, the elderly and anyone who was in need. With the help of social media, they got the word out and then something wonderful happened. Volunteers came to help package and deliver the hot meals and, by day three, they had provided 165 meals to shelters.

James and Ryan were now at the center of an explosion of need and good will. When other chefs got wind of what they were doing, the team grew. They were offered the kitchen at Bistro 25 in Blue Point and Chachama in East Patchogue. This gave them the space they needed and the orders for curbside and delivery started pouring in. They could barely keep up.

The charitable collaboration expanded with other restaurant owners donating time and ingredients including, Vespa Italian Chop House in East Northport, Borelli’s of East Meadow, Off-The-Block in Sayville, LeSoir in Bayport and the Sobul chain from their many locations. James and Ryan now had the resources to hire 15 chefs and are averaging between 75 to 100 orders per day, with a range from Mastic to Massapequa. In their first 15 days of operation, they provided over 1,800 meals, coordinating with shelters, Island Harvest, Helping Hands and by hand-delivering to nursing homes.

James recalled when they arrived at Siena Village, a retirement and assisted living facility in Smithtown, the residents were standing in a line waiting for them. One by one, the team distributed 300 hot meals. It was a poignant moment; one he will never forget.

These philanthropic entrepreneurs have received countless thank you notes and letters from those they’ve helped, but say there’s nothing more rewarding than knowing you did something to help someone else.

Their recipe of passion and heart is the real spirit of Long Island. What an incredible success story!