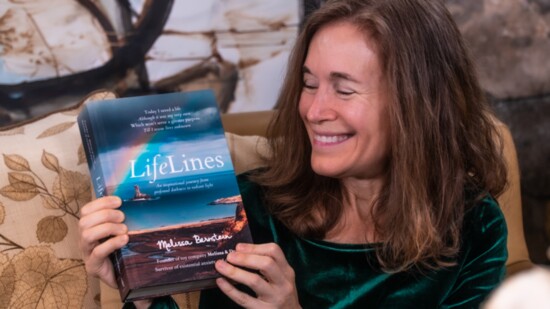 You are Not Alone

With LifeLines, Melissa Bernstein Helps Those in Anguish

“One of the most important things you can do on this earth is to let people know they are not alone.” – Shannon L. Alder

The world is a big place. So we divvy it up into smaller, less intimidating pieces. Our country, our state, our town, our street. We join groups of people who share our interests and passions. When we’re surrounded by people we enjoy, we’re not lonely. We’re part of a community. Communities are an important and integral part of our lives and happiness.

There are some who have difficulty finding their like-minded humans. Not for lack of wanting or trying, but because they simply don’t know who they are. Society may dislike our placing labels on others, but each of us has our own intrinsic labels, the ones which we choose to define us. We may embrace labels such as “African American” or “Feminist” or “Tennis Player.”

Yet if we don’t know our label, how do we embrace it? How do we know where we belong?

Within all of us is a piece we find impossible to define. For some people it’s small enough that we ignore it. For others, it’s overwhelming. Being unable to know what it is, exactly, makes us even more vulnerable to it. It becomes that label which best explains who we are no matter how much we may dislike it.

Melissa Bernstein has a large family, devoted husband, and breathtaking wealth. Yet she wasn’t happy - far from it. None of her labels, “Mom,” “Wife,” “Wealthy,” gave her a sense of belonging. Which is a tricky thing in Westport - or anywhere, for that matter - where they’re considered enviable descriptors. Society assumes certain labels must elicit specific levels of fulfillment and is disinclined to alter the scale.

However, “Meaning doesn’t come from external validation,” Melissa points out, “It may even be the reverse correlation, once you have everything you ever wanted and more then where does that lead you? Once you achieve everything and you still find yourself wondering about your meaning in life?”

Creating was the only thing that gave her a sense of purpose. When she was young she wrote verses, up to 10 a day, thousands of them, trying to make sense of her depression and her need to control the tumult of her thoughts. She composed music. If her thoughts weren’t focused on words and notes it would spiral, as it routinely did, into a despair that wanted her dead. She didn’t know why this happened, only that it happened.

She didn’t meet Doug until she was 19 even though her parents had known his parents for years. They talked over the phone several times before he invited her on a date. When he picked her up at her home she weighed 80 pounds and was too weak to walk up a flight of stairs. She wore baggy clothes to hide her gaunt frame.

She imagined her dress concealed her emaciation, but when he saw her he knew something was deeply troubling her. All he knew, though, was that she was too thin. So he helped her. He began taking her to beautiful restaurants and made sure she ate every bite of her meal.

What Doug couldn’t know was that she loathed her inadequacy, her inability to be what society made her think she should be. She needed to be perfect. Starving herself, denying herself pleasure, was how she coped. Not drugs or alcohol: substances masked feelings. She needed to control them. But for some inexplicable tease of hope, she kept herself alive. Anorexic, but alive.

Still, she ate what he asked her to. “Doug was relentless about how important it was, and I’m glad he never gave up because I began feeling much better after beginning to eat again.”

They fell in love, married.

She felt better, but still took measured steps to ensure her sense of control.

Together they created six children and a multi-million dollar toy company, “Melissa & Doug.” For Melissa, this pattern of production and creativity provided mentally equanimity. Making a toy would take her mind off of her inner self, seeing the joy it brought to a child would put her on a lighter plane. “For years,” she states, “creating toys was the catalyst to channel darkness into light.” Perhaps this was why her favorite category of toy to design is pretend play, which allowed for the subversion of reality by living in a different and imagined universe.

Until it didn’t. The demons would return, the despair possessing her. “Nature kept telling me I was ultra-odd.” She reached out a few times for help, “but they looked at me like I was crazy. People say that mental illness isn’t a stigma. But it is - let’s be honest.”

Each day she fought to repress and deny her misery; what she deemed her “imperfection.” She kept busy, family and work gauzing her agony and feelings of worthlessness. Even as she felt lightness through her toys, she became aware that her need to create toys, verses, and anything else was fueled by the same control that caused her anorexia and need for pills. “My creativity was also a form of control in needing to rabidly channel the chaos in my head to something very defined.”

Until one day, in her late 40s, she realized, “I needed to make a dramatic change because the pain was too unbearable…” She didn’t succumb to starvation or pills, but “I rigidly controlled pretty much everything I did!!!” She admits.

A podcast led her to philosophy. In reading Frankl, she began to clarify her suffering.

She continued reading. “I read Nietzche, that a nihilist believes there is no meaning in our cosmos, that we’re hopeless and powerless.” Most people walk away from Nietzche feeling bereft and depleted. But for Melissa, it’s effect was opposite, “I put my hand on my heart and thought ‘This is me.’”

Camus then taught her “it would be wrong and weak to take my life. Though there is conflict with the lack of meaning and the need to make meaning, we must accept it and rise up and still make meaning in the time we have. I call it ‘the angels singing.’”

With a swell of relief, she finally had a label for her anguish: Existential Despair. No, it’s not the label most would want. Sometimes we can’t choose our labels, but we can accept them and give them meaning.

Through verse and finding inspiration in others, Melissa sought a path to self-acceptance and inner peace. Day by day she worked on accepting herself, from the tremendous gifts in her life to the snarls of her affliction. Existential despair may be her label, but it would no longer dominate her life. Slowly, she gained the confidence to share her story on a podcast.

Melissa admits, “I thought I was the only person with existential despair. I’ve learned I’m not.”

Of one letter she received, Melissa says, “It read - ‘I’m a single black mother on welfare and when I heard your story I was like white female who’s made it. And then I looked in your eyes and saw your pain. This will forever change how I judge others. We are exactly the same.’”

For Melissa, and for most people who suffer from any form of depression, healing is an ongoing process. Yet having discovered a path through the weeds, she thought her journey might help others. She wrote a book, LifeLines. With her husband of 32 years she created an “eco-system" of LifeLines.com. There is no charge for this eco-system, “Doug and I have been so fortunate with Melissa & Doug, we want to give back,” she explains.

Melissa concedes that LifeLines isn’t for everyone; people may feel more comfortable with a different method of healing or working with a mental health professional. But, first and foremost, she wants people who are suffering to know they are not alone. She is creating a community of people to find strength, self-acceptance, and purpose. And, perhaps, a bit of happiness among like-minded people.