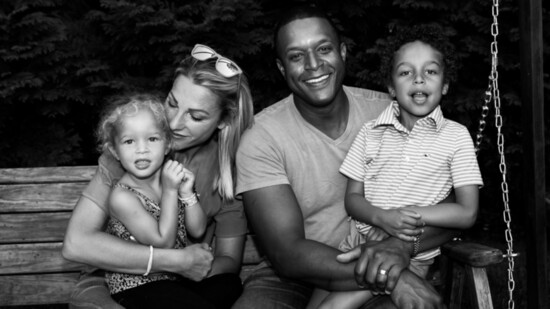 An Interview with Craig Melvin About His New Book, POPS

His new book, POPS, is a frank yet compassionate account of childhood with his father, Lawrence, who struggled with often-debilitating alcoholism for 40 years. When he wasn’t drinking, Lawrence worked the night shift at the post office or gambled away his salary on video poker machines.

Through extensive interviews with Lawrence and other relatives, Craig pieces together the puzzle of a man who sought connection and love, but who, himself, lacked the father figure he desperately needed.

Westport Lifestyle Magazine: Pops has many themes: Life, struggles, father figures, parenting. Who did you write the book for?

Craig Melvin: I wrote the book for my dad; it’s a love letter to my father and my mother. One of the highlights for me was interviewing both of my parents on tape for hours. Honestly, they answered every question that I asked. Sometimes I wish they hadn’t answered as honestly as they did.

WLM:It seems it’s a love letter to all fathers

CM: Actually, yes - it’s a love letter to fatherhood. Initially I was going to write a book about those dads [from Craig’s Digital segment on TODAY.com “Dad’s Got This!”] but it morphed into this longer story about my complicated relationship with my own father and what I discovered about being a parent.

WLM: We all have a measure of success for what we do. How will you measure the success of this book?

CM: If, literally, just one person who has a loved one who’s struggled with any sort of addiction for an extended period of time reads this book and says “Know what? I’d written them off but maybe I shouldn’t have.’ If one person decides to reconnect to save the parent or a loved one, a brother or sister, that’s a win.

I also want people to laugh the way we did through much of our childhood. Because a lot of it was funny. It’s still funny.

WLM: You mentioned being mad at your father for being a “ghost” and never around, but did you ever feel uncomfortable or embarrassed about his being a drunk? If so, when?

CM: Your frame of reference becomes what you’ve always seen; I had always known him as an alcoholic. I was angry about the absenteeism and the gambling. But I still sought my father’s approval - I think it’s innate and I don’t think it changes as you get older.

WLM: Given the legacy of addiction in your family are you concerned about your children and addiction? Do you have plans to address this legacy and the dangers of substance abuse with your kids at some point? If so, how?

CM: I am concerned about my kids. Quite frankly, I’m concerned about myself. I enjoy a good bourbon and good cigar. Years ago I gambled much more than I should have. My dad would pull me aside and say “Hey you might want to lay off” - it’s been helpful because he’s able to speak from a place of experience.

Anyone who’s dealt with what we dealt with would be lying to you if they didn’t tell you they worry about their offspring struggling with the same things. Fortunately, [my kids] are still young. But you ask a good question. My wife and I probably should give that some thought.

I think there’s value in demystifying alcohol. I’m not suggesting on any level you should serve beer to underage kids. But growing up we saw dad always with a beer in his hand, literally drinking and driving. So there wasn’t this mystery surrounding alcohol. I didn’t get to college and wonder “What is this? I’ve never known what this is!”

CM: That also being said, my dad smoked more than he drank but in my life I’ve never had a cigarette.

WLM: (More serious now) Typically, children of alcoholics have issues: insecurities, repression, or trust issues. Did you experience any of these? If not, how did you navigate so smoothly?

CM: Two things to that point. I have long maintained people can be motivated by bad examples as much as good examples. You can look at someone close to you and say, “I don’t know what I want to be, but I know I don’t want to be like that.”

Then my mom filled in the gaps in remarkable ways. It’s difficult to overstate the important role she played in my formative years when my dad was at his worst. She was my mother, father, uncle - she did it all. At one point she had to get a second job because my dad had gambled away so much of his money.

I didn’t do it consciously, but I’ve always been able to find father figures along the way to fill the void. I’ve been blessed in that regard.

WLM: I find it amazing you seem to have no resentment toward your dad, despite his 40 years of alcohol addiction and gambling. Why is this?

CM: I don’t often quote Oprah, but she said: “Hurt people hurt people.” It is wholly unrealistic to expect someone who didn’t have a father in their life* to magically be a great dad. If you’ve never seen something, how are you going to be that? Then you add a gambling addiction, alcohol addiction, complicated marriage, working the graveyard shift at the post office. I’d say, “Dad, it’s remarkable you did as well as you did for as long as you did.”

WLM: Last question: When can we expect your second parenting installment, Moms? She must have been a pretty good mother and I could use some tips.

CM: You can rest assured if you write a book about your father, your second book has to be about your mother. If I reached any sort of professional success in my life, it’s because of God and Betty Jo Melvin.

*Craig's grandfather was also an alcoholic who abandoned his family and children.