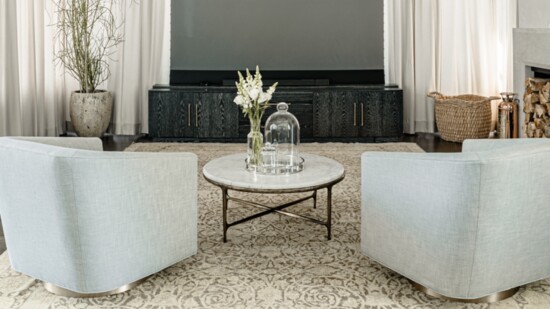 To the naked eye it appears as a tasteful indoor bench*. You know, something onto which you place decorative cushions and pillows and then sit.

But when you set the soft stuff neatly aside, flip open a panel, and press a button on the remote - Voila! Out rolls an ambient light-rejecting screen (100”, 110”, or the big 120”), an ultra-short throw projector and a sound bar which you can take apart and scatter around the room for surround sound. The simple yet stylish seat transforms into a movie screen suitable for watching absolutely anything!

The whole thing “plugs in like a hairdryer,” explains Mark Motyl, founder of Vivid-Tek, “It’s controlled by an Apple streaming device so you can get everything you want.” Plus it’s so high def you may find yourself studying Will Smith’s cuticles while watching Gemini Man.

It’s easy, impressive, and most of all: fun.

One day last year his daughter “insisted” he watch Game of Thrones with her. Ironically, Mark isn’t much of a TV watcher. But hell hath no fury like a teenage girl whose request is not promptly fulfilled. Mark acquiesced and resolved to make the GoT-watching as fun as possible.

He bought a cheap projector, a cheap screen, re-arranged the basement furniture, and muscled through every episode of every season. Turns out, his impromptu home theatre experience was - you guessed it - fun!

Now, Mark has built some notable homes in Westport with an eye for maximum entertainment potential: he knows what homeowners enjoy. This unsightly projection set-up inspired a new idea. There must be a way, he mused, to create a high-quality movie theatre experience that doesn’t involve dedicated rooms or large, cumbersome TVs that ruin walls. From his homebuilding days he knew, “$200,000 basement movie theaters are on their way out. Their traditional seating in rows is anti-social. Plus, why would you watch a sitcom in a movie theater?”

He spent the next ten to twelve months “wasting” expensive materials, customizing furniture with carpenters, and messing around with high-end electronics and a bunch of invention-y things until he had created that which may revolutionize the home cinema experience.

Of course, Mark has many ideas on how to increase the theatre’s fun potential. Movie nights, yes. But also - click onto the Google Arts and Culture site to scroll through the halls of life-size museums, log onto an exercise class and feel as though you’re sharing sweat with impeccably toned real people, or go to Google Earth and closely inspect homes without creeping out their inhabitants. (Note: the last idea wasn’t his.)