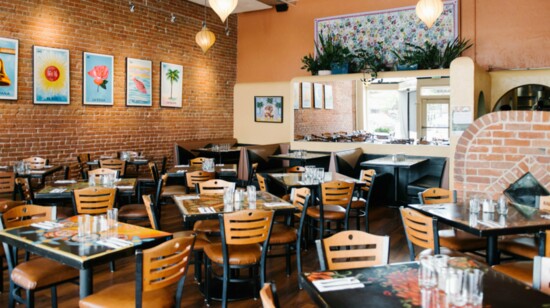 The Rio Grande is back to blending smiles, delicious food, and the perfect margaritas on Mountain Ave.

The news is out, The Rio Grande has officially reopened their location on Mountain Ave. When a fire damaged the building last year, it left a lot of questions for Founder and Owner, Pat McGaughran and the rest of the Rio team. While the ‘how’ wasn’t all immediately apparent, wheels were immediately in motion to accomplish two things. They needed to find a temporary home in order to keep their team employed and the margaritas flowing, and they needed to begin repairing and remodeling their 30 year home so they could move back in as soon as possible.

“We were determined to keep our people employed,” Steve Richter, Chief Operating Officer for Rio Grande Restaurants Inc. told us. “Our business is our people.”

The first issue was solved with remarkable speed. After touring a few available places around town, The Rio Grande opened just around the corner on College Ave, and since they got there quickly, not a single paycheck was missed by the staff and everyone who still wanted the job had it. Next to be conquered was the behemoth task of cleaning up after a fire and creating a new space that would still capture that unique style that is The Rio Grande. The fire department had worked hard to save the building but it needed to be emptied and completely remodeled. McGaughran set to work, they had been anticipating some design renovations already but nothing had been finalized or really planned yet.

“Suddenly you’re under this time pressure to get the design done, get all of the approvals and get everything ordered,” McGaughran says of the situation. Almost simultaneously with the Fort Collins remodel he was also working to renovate the Denver location because, as he puts it, “we can’t stand to stand still, so we decided to do two at once.”

Channeling his vision and creativity, the mission was simple; to blend contemporary design aspects with the historic aspects of the building. Sleek new furnishings, tasteful colors accenting the original brick walls, and a modern approach to decorating as opposed to the overcrowded walls that can sometimes plague restaurants. The upscale feel of the new space hasn’t changed what’s at the heart of this Fort Collins founded establishment: Deliciously fresh and made from scratch food, innovative and thoughtfully made margaritas, and the same community focused approach to dining that has allowed this Fort Collins staple to thrive for 36 years in the heart of Old Town.