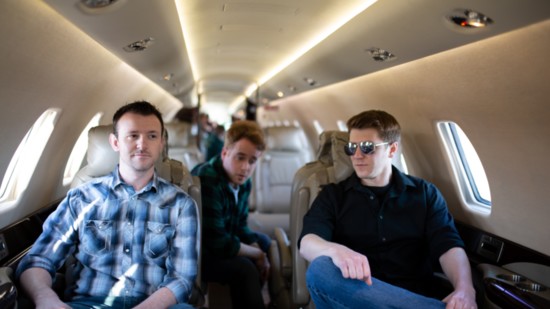 A Closer Look at Northern Colorado Rock Trio the Sogs

We couldn't wait to sit down with the band and find out what motivates them to keep rockin' in a sometimes difficult industry, the music biz.

What are your musical influences?

Lee: My biggest influences musically are REM, Pearl Jam and the sounds of the '90s in general, Sarah McLaughlin and honestly any good, honest singer/songwriter. Recently I have been listening to a lot of old country and country rock like the Flying Burrito Brothers and Gram Parsons which has been a new perspective on songwriting for me.

Tanner: I never know what to say to this question without talking for hours. It’s tough picking just a couple of artists when I’m influenced by thousands across every genre. I like some of the same music as your grandma and also that angry kid who lives down your street. That being said, in terms of playing with The Sogs, I’d say the '90s-era alternative rock and punk-pop bands have had the biggest sway on our sound.

What are some local bands you can't get enough of?

Lee: Denver-based Television Generation and In the Whale. Both put on great live shows. Seeing In the Whale with Bob Mould this year was one of the best shows I've seen in recent memory.

Dylan: I’m with Lee. TVG and ITW are two local bands that blow me away every time I get to see them. We’ve been lucky enough to play with TVG a handful of times, and those shows always end up being some of my favorites. Also, have to shout out Poets & Wolves who are phenomenal musicians and some of the nicest people we’ve ever met in the Northern Colorado music scene.

Where do you draw inspiration from?

Lee: Most of my inspiration comes from experience. Almost any song I've written has a connection to something in my life present or past. I like to make things relatable but still have detail enough to be unique to my own experience. Lyrics are memorable when a listener knows the feeling or situation themselves. It's an expression of a perspective on the same thing we all are experiencing together.

Dylan: Art in all forms inspires me. Live music seems to spark my creativity more than anything else. I love seeing what other artists are like in person, what their stage presence is like, how they sound outside of the studio. When I see a great live show, it gets me amped up to try new things in our own shows.

Tanner: A lot of people listen to music to hear a story or understand something that exists in the plane of reality. I’ve always felt I listen to music to escape reality or, perhaps less depressingly, to experience a heightened sense of things that can’t quite be put into words—to feel something profound that defies explanation. Any piece of art that can illicit that feeling inspires me.