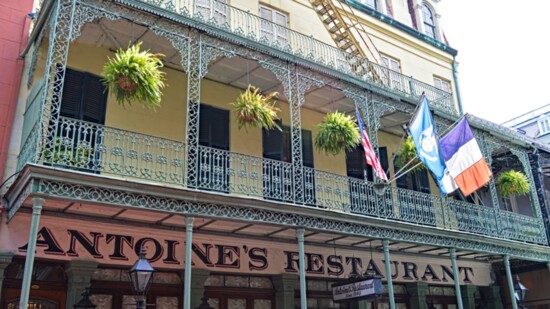 Much more than FOOD and Bourbon Street, but what a way to start.

Just why is New Orleans called the “Big Easy?” A local man explained it well. “No one is in a hurry here. We don’t take one day at a time, we take each hour at a time,” he quipped. Indeed, even the street people seem rather languid in ‘NOLA,’ as it is also affectionately called. “How y’all doing,” one called out affably to us one morning as we walked by him, on our way to stand in line for those “world famous”beignets at Café du Monde.

It’s hard to believe that New Orleans, where anything goes and anyone feels at home, was once a bastion of rules and regimens, under French rule, which ended in 1812 with the Louisiana Purchase. Today’s “Big Easy,” is happily booming in tourism, jobs and rebuilding after the devastation of horrific Hurricane Katrina, back in 2005. But this is a city built and fortified by resilience – and its residents and visitors are passionate in their loyalty.

Katrina still works her anguish – with just about anyone who lived through it wanting to tell their stories, and yet not wanting to tell them. The trauma of having endured such a tragedy lingers and is movingly expressed at the ‘Living with Hurricanes: Katrina and Beyond’ exhibit at the circa 1791 Presbytère, part of the Louisiana State Museum at Jackson Square in the French Quarter. The lobby sets the somber mood, with colored stripes on the wall depicting the water levels reached by the rising waters, while the ceiling is hung with hundreds of aquamarine glass bottles filled with notes, in homage to the 1,500+ who perished, mostly by drowning. Local celebrity Fats Domino’s piano is displayed upended here, as it was found after the flooding – a baby grand Steinway, destroyed beyond repair. A placard speaks to the “spirit of resilience and a profound sense of place that has carried us through.”

But again, New Orleans is reborn, in many ways. During our visit, we were entranced by the constant surprises. Music is everywhere – while the countless jazz and other clubs and lounges are outstanding, just a stroll through the French Quarter is a mélange of music – street performers on just about every block, many of them fabulous. This city is a music lover’s haven, so much so that one local told us, “In New Orleans, there is too much soul out of control!”

A don’t miss spot is Congo Park, on the edge of the French Quarter. Here, jazz is said to have been born, under the blissful shade of the enormous live oaks, where there is a centuries-old history of slaves, free blacks and later, musicians meeting on Sundays to congregate, sing, dance and play music. Now renamed Louis Armstrong Park, for the city’s most beloved native son, it is still an important venue for music festivals, and a community gathering place for parades, marches and drum circles.

The French Quarter is a must-see and do. A crazy hedonistic hodgepodge that contains breathtakingly beautiful architecture, hidden courtyards, classic statuary and gardens, the French Quarter defies definition as a neighborhood. Restaurants, hotels and shops range from the most elegant to some of the most down-and-dirty dives you’ll find anywhere. The most bohemian and let-loose mentality is on the infamous Bourbon Street – so if you’re not into those frozen daiquiri bars and exotic dancers beckoning to you from entryways, venture onto quieter streets.

While the wrought-iron balconies of the French Quarter (also known as the Vieux Carre) are well-known, many are not aware that New Orleans is home to other gorgeous architecture styles, such as Creole Cottages and Townhouses, Shot Gun and Double Shot Gun houses, Double Gallery homes and Greek Revival mansions. The upper class Garden District has been the go-to place for home and garden viewing for nearly two hundred years, but now, other areas such as Uptown and Bywater are popular for viewing as well. Magazine Street, at the edge of the Garden District, is up-and coming stylish, with new boutiques and bistros opening constantly. Just about everywhere, look up and you’ll see Mardi Gras beads hanging on light poles, tree branches, and power lines. After all, the wondrously festive Mardi Gras is yet another defining feature of New Orleans.

If you are not visiting during the raucous insanity and full-out fun of pre Lent Mardi Gras festivities, be sure to take in a visit to the permanent Mardi Gras exhibit, also at the Presbytére. With extensive displays of costumes, floats, history, accoutrements, etc., dating from the early twentieth century, one could easily spend an hour or two mesmerized by the extent of involvement in a one-week festival that takes a full year to plan and prepare. It’s so big in Louisiana that in most areas, schools are closed for Mardi Gras week – even some universities. For those who want even more, take in Mardi Gras World, a cavernous showplace of Mardi Gras floats, costumes and regalia from decades past.

New Orleans well deserves its reputation for being a culinary capital – with influences from French, Cajun, Creole, African and many other cultures, and some of the best loved chefs in the world calling it home. Visitors will be letting those belts out a notch or two, whether dining on Trout Almondine or fresh oysters at one of the elegant classic establishments like Antoine’s or Arnaud’s, or scarfing down hefty po’boys and spicy gumbo at any of the more downhome cafes throughout the city.

The National World War II Museum is regularly listed as the top attraction in New Orleans by Trip Advisor readers. Founded by author and historian Stephen Ambrose, the enormous facility tells the story of America’s involvement with World War II interactively and creatively, through film, models, posters, weapons, letters etc., in an exemplary set of permanent and temporary exhibitions, such as the current display honoring the Tuskegee Airmen and Black Seabees. www.nationalww2museum.org/visit/exhibits/special-exhibits

There’s so much more to do and see – the New Orleans Museum of Art, the Ogden Museum of Southern Art, City Park, plantation tours, swamp tours, music venues like the intimate, no-cover Irvin Mayfield’s The Jazz Playhouse, antiquing on Royal Street … the list goes on and on. There is simply nowhere else like New Orleans – where just doing nothing feels like doing so much!
www.neworleans.com