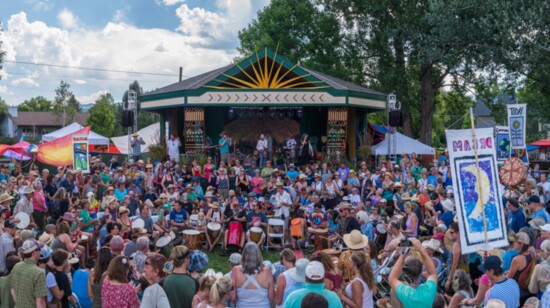 Celebrating 50 Years of the Wild, Wonderful Joy of Mountain Fair

What is it about Mountain Fair? The people, the music, the pies, the zany antics of townsfolk spilling out onto the streets? What makes it so special, so memorable, and so darn fun?

Arguably the valley's most colorful event of the season, Mountain Fair just feels like summer. And it's been that way since the festival was held for the first time in 1972.

"That was when cultures were colliding in Carbondale," says Amy Kimberly, executive director of Carbondale Arts and also the longest-running director of the Fair. "The people of this old ranching town were seeing the influx of hippies and artists who lived a very different lifestyle, but wanted to find a way to bring everyone together. Mountain Fair ended up being the event that could do that. The Fair was—and still is—a time for all people to come together and have a good time."

Kimberly adds that today, the three-day festival continues to attract a diverse crowd: artists, trail bums, professionals, families with kids, seniors, community activists, and farmers all show up in droves. All ages, all backgrounds, all are welcome.

Over the past five decades, what started as a small party in the park has grown into a cherished annual festival alive with traditions all its own. But despite the years, what Mountain Fair means to our community has never changed. Its root mission lives on. As the Carbondale Arts team notes on its website, the Fair “exemplifies the values of Carbondale: collaboration, creativity, education, volunteerism, curiosity, and inclusion.”

The images on the following pages celebrate the people of Mountain Fair, then and now. Visit the R2 Gallery at The Launchpad this month to experience more of the Fair’s history, and tune in to a special podcast produced by Carbondale Arts and KDNK to hear some of its stories. The big event happens July 23-25 in Sopris Park. Find details at CarbondaleArts.com.

The Early Years in Photos

Title page: Dancers have been a big part of the Fair since the beginning, like this crew from 1975. Photo by Wick Moses.

This page: Limbo contests started in 1980 and have dazzled many crowds over the decades.

Opposite page: 1. Ladies from the ranching and mining community chat in this undated 1970s image. Photo by Jim Ryan.

3. A young Charley Chacos (owner of Bonfire Coffee and the Village Smithy) in his KISS phase. Photo by Jim Ryan.

4. It took a village to hold the event, and these two characters, Tom Fulker and Jim Lawrence, were major players in the old days. Today their children and grandchildren volunteer for the Fair. Photo by Jim Ryan.

This page: 1. Kids play along the irrigation ditch lining Sopris Park in the 1970s.

2. Wood splitting contests were started as a way to honor old Western heritage, and remain a fun way to show off contestants' muscles today.

3. Young hippies compete in a wheelbarrow race in the 1970s.

4. The original stages were hand-built for Fair weekends only. Photo by Wick Moses.

Opposite page: 1. Today's festival starts with a large drum circle led by the Mother of the Fair, Laurie Loeb. Photo by Eric Allen.

3. Fire shows were added in 2004 when Amy Kimberly began directing the Fair.